Knicks Vote to Stay The Same; Stick Marbury to Bench 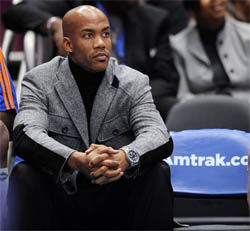 On Election Day, vote for the Knicks as the most naïve organization in sports. The Knicks met with Stephon Marbury on Monday and told him they are not going to play him or even dress him for games unless someone gets hurt. Amazingly, Knicks’ management seems to think this problem will now be resolved. Mike D’Antoni told the media, "Pretty soon that story is not going to be fun to read because it is going to be the same old story. You are going to be beating a dead horse.”

Sorry Mike, the press loves to beat dead horses and Stephon is not going to be happy sitting on the bench all year when he is a free agent at the end of the season. He has asked the Players’ Association for advice and while he is playing the good soldier now, it is easy to see this turning ugly soon. Donnie Walsh can say that this issue is “closed” but as long as Marbury is still on the Knicks it won’t be.

Photo of Stephon Marbury in street clothes by AP/Stephen Chernin

#basketball
#Donnie Walsh
#knicks
#mike d'antoni
#sports
#stephon marbury
Do you know the scoop? Comment below or Send us a Tip