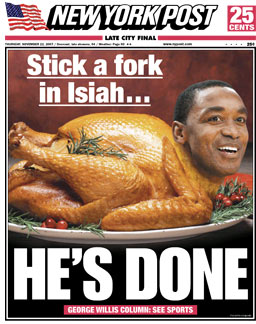 A day after the NY Post served up a Thanksgiving day front page cover of Knicks president and coach Isiah Thomas as a turkey, the embattled Thomas proclaimed he would stay in his job, saying, "I don't foresee there being any changes this year." Which the Post calls "LOAD OF BULL?" But really, if there's one thing that the Post and Daily News must have been thankful for, it's having such a spectacularly poorly managed team. And may we point out that the Isiah Turkey reminds us of Kramer as a Kenny Rogers Roaster?

Maybe even the NY Times is thankful that Isiah and the Knicks are so terrible. If they weren't, then the Times couldn't create this graphic showing potential replacement coaches for Thomas, with their pros and cons. The choices include loyal fan Spike Lee ("Downside: By giving him a free seat, the Knicks would lose revenue") , former Vice President and Nobel Peace Prize winner Al Gore ("Upside: Someone has to clean up the environment at the Garden"), and Rutgers' women's basketball coach C. Vivian Stringer ("Downside: Would need to work at the Garden.")

Of course, there are more other more logical replacements mentioned, like Jeff Van Gundy and Rick Carlisle. Interestingly, Van Gundy said on ESPN Radio that Thomas needs support, “I do believe right now that everybody around the Knicks and New York have to just calm down and see where they can go from here. When they were 2-1, everybody was beating the drum that they’ve turned the corner. An NBA season is so fragile." 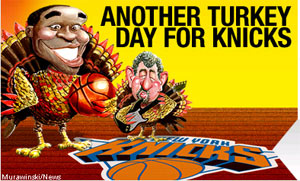 The Daily News has a list, or, rather, a "Reign of Error" from the most recent Knicks years, including signings, trades and coaching shifts. Mike Lupica was pretty scandalized by the Knicks' decline, "The worst of it was the other night, a night when Knicks fans showed more fight than the most expensive group of players in the NBA as they turned what was supposed to be the World's Most Famous Arena into the lousiest address in sports." And on Thanksgiving Day, Daily News' Filip Bondy named James Dolan its Top Turkey (A-Rod, Scott Boras and Brian Cashman got "Four Tofurkeys") -and the Daily News made cute illustrations of Thomas and Dolan as turkeys.

But while most fans want Thomas fired, it seems that some legal issues may be precluding the Dolan family from doing so. Hold on, kids - it's going to be long 71 more games this season.

The Knicks play the Chicago Bulls this afternoon at the Garden. Expect many "Fire Isiah" chants.