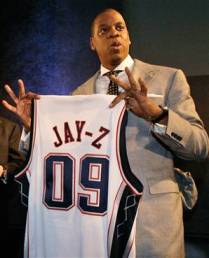 Tonight, the NBA holds its annual draft lottery in Secaucus, NJ to determine the order of the first 14 team picks for the draft on June 26. The lottery, broadcast on ESPN at 8 p.m., utilizes a somewhat complicated formula of team records, probability, and ping-pong balls. How complicated? Check out this explanation (the Wikipedia entry can be helpful).

The Miami Heat have a 25% chance of nabbing the first pick. Going into tonight's draft, the Knicks, who had the fifth worst record in the league, have a 7.6% chance of getting the first draft pick.

With the 10th worst record, the Nets have a 1.1% chance of getting first pick, but Nets investor Jay-Z, the representative on hand tonight, is hopeful. He says, "This is very exciting and I hope my nickname ‘Lucky Lefty’ holds up."

Flashback: The first lottery was held in 1985--and that's when Patrick Ewing was selected by the Knicks. It's also when people accused NBA commissioner David Stern of rigging the lottery.

Update: Wacky! With only a 1.7% chance of winning the first draft pick, the Chicago Bulls beat the odds and won it! The Knicks ended up with the 6th pick and the Nets have the 10th.