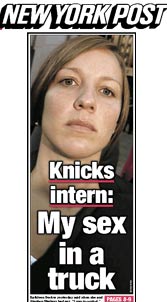 When you care enough to send the very best: Yesterday, it was revealed that former Knicks marketing intern Kathleen Decker sent a Hallmark card saying that having sex with NY Knick Stephon Marbury in his car was a terrible mistake. Decker testified on behalf of Madison Square Garden, who, along with Knicks president and coach Isiah Thomas, is being sued by Decker's former boss, Anucha Browne Sanders.

Browne Sanders claims that she was the victim of sexual harassment and that she was unfairly dismissed from her position as vice president of Knicks marketing. Earlier in the trial, Browne Sanders said that Decker felt coerced into having sex with Knicks captain Stephon Marbury in a truck, "She basically did whatever he asked her to do. She considered it to be consensual because she agreed to get in the car.".

Yesterday, Decker explained the circumstances of the encounter, "Stephon Marbury is parked outside the strip club. He asked me, 'Are you going to get in the truck?' and I got in the truck." And regarding sex, she said it was"completely" consensual: "I was in control." Decker also denied that she was upset about the encounter, claimed that Browne Sanders demanded to know about it (it's against policy for interns and players to fraternize) and that the plaintiff acted "judgmental."

But then Browne Sanders' lawyers asked Decker about a flowers-and-hearts decorated card she sent her then-boss which read, "I've learned from that mistake and will not let anything like that happen (ever) again...You have been incredibly supportive throughout this situation and I appreciate you being so understanding and willing to help... Thank you, Anucha, for listening, for understanding and for your support."

Decker added that she is currently employed by MSG; per the Daily News, "She testified she landed a big promotion at MSG six weeks ago as the court date for the explosive case loomed." Which prompted Daily News columnist Jane Ridley to hope "that Garden employee Kathleen Decker was smart enough to get things in writing before she agreed to appear as a witness for the defense" because her testimony seemed to have mixed results.