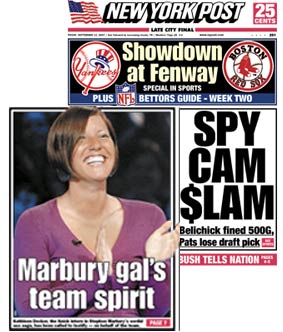 Sports are always a big story in NYC, but yesterday's NY Post cover had three sports stories: The Yankees-Red Sox game, the Jets-Pats spying controversy, and the former Knicks executive's lawsuit from accusing coach Isiah Thomas and Madison Square Garden of sexual harassment. But the Knicks-MSG lawsuit was the only story with a photograph, and it was of Kathleen Decker, the former Knicks marketing intern who had sex with Stephon Marbury in 2005.

Decker, who is now 24, had told former Knicks marketing VP Anucha Browne Sanders that she was lured into the Knicks captain's car, where they had sex. Browne Sanders testified that Decker felt she had to get into the car because of who Marbury was, "She basically did whatever he asked her to do. She considered it to be consensual because she agreed to get in the car." Browne Sanders says that she told MSG management about the incident, but that management never followed up by questioning Marbury, which has become a major point in her lawsuit against Thomas and MSG.

According to the Post, Decker may be called to testify by MSG lawyers, who has "have hinted that Decker could finger Sanders for allegedly forcing her to lodge the internal complaint." Former MSG interns say that interns were forbidden to consort with players, but a former MSG staffer who knew Decker during the time she interned said, "Guys were very, very after her, and why not? She is very pretty. Everyone was after her... because she was cute."

Today's news about lawsuit is that Thomas was supposed to go to "sensitivity training." The Post reports that the taped testimony of an MSG human resources executive will be played next week. Browne Sanders had complained Thomas tried to hug and kiss her during a game, and the HR executive explains, "[Thomas] admitted that he had touched her and attempted to kiss her. Our concern was that different people had different sensibilities." Browne Sanders was later fired (for other reasons, MSG claims), and before Thomas could go to training, Browne Sanders sued MSG for $10 million.

The Daily News reports that MSG may also try to introduce a "secret witness," a co-worker from her days at IBM. The man, who is the son of another IBM executive, allegedly made "inappropriate comments" to women, including Browne Sanders, who complained to higher-ups. MSG lawyers may want to paint her as being "chronically litigious," but Browne Sanders admitted the incident, testifying, "I didn't make a complaint [at IBM] of sexual harassment. I made a complaint of some inappropriate statements ... So in my 11 years at IBM, I told my manager that someone had said something to me, yes."