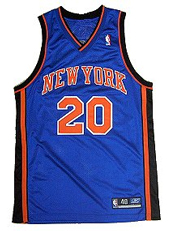 We talked to someone who was at the Knicks game in Boston Thursday night and he told us he saw something he'd never seen at a sporting event before––a fan ripping off his team's jersey and throwing it onto the court in disgust. The Boston crowd loved it. The gesture came as the Knicks were trailing the Celtics by 50 points in what would come as the team's second-worst scoring performance in the history of the franchise. Boston went on to win the game 104-59. The Daily News tracked down the dejected fan and identified him as 36-year-old Edward Barnes from East Islip, Long Island.

Barnes is a superfan, to say the least. He sports eight tattoos, all orange in tribute to the Knicks. He also drives an orange Humvee, sleeps in orange-striped sheets, and wears orange sunglasses. His eyebrow ring is blue. "Everything is blue and orange for the Knicks - my office, my car. I've got problems, I tell you."

Thursday's game was nationally televised and Barnes had driven up to Boston to celebrate his nephew's birthday. He was seated near TNT reporter Craig Sager, who he bet that he'd surrender his Knicks jersey if the team fell behind by 50 points. They did and Barnes did, and the NBA even included his throw-down in a clip (it's at the end).

In addition to the positive reaction he received from Celtics fans, we're sure that there are many Knicks fans who can sympathize with Barnes' frustration. The team isn't just terrible; the whole organization seems dysfunctional, suffering a sex harassment scandal earlier this year involving embarrassing behavior by coach Isaiah Thomas. Barnes thinks Thomas needs to go and calls guard Stephon Marbury "a bum."

The Knicks actually won their following game after Barnes' jersey-tossing. Maybe he's on to something.