Domestic cats have been in the crosshairs of bird lovers for many years now, with studies suggesting they're an invasive species responsible for the decimation of migratory songbird populations. Now new research—conducted with KITTY CAMS—reveals that your precious Mittens is even more bloodthirsty than Warner Bros. ever suspected. If only more research could be so Internet friendly!

The study, carried out by researchers at the University of Georgia, enlisted the help of 55 cat owners in the suburbs of Atlanta. Each of the 60 participating felines was equipped with a lightweight, waterproof camera with LED lights to record activity at night, attached to a breakaway collar. The cameras accumulated an average of 37 hours of footage per cat as the pets roamed around over the course of 7-10 days. You can watch about a dozen clips from the videos on the National Geographic's website—"Fighting Off an Opossum" is perhaps our favorite.

The study appears to contradict the prevailing notion that cats mainly focus on killing birds when they're outside. On the contrary, it seems they go after any smaller creature with the misfortune of crossing their paths. In fact, 41 percent of animals killed during the study were reptiles, while birds constituted just 12 percent of the overall prey. Of course, this may simply mean that birds are harder to kill. The point is, the University of Georgia has given the Internet a lot of sweet POV cat videos! Unfortunately, they're not embeddable, so here's one of a local cat catching a cockroach:

The study also found that your cat may be two-timing you. "One of the most surprising things we witnessed was cats adopting a second set of owners," the study says. "Four of our project kitties were recorded entering another household for food and/or affection!" Certainly our Whiskers would NEVER... right, Whiskers? 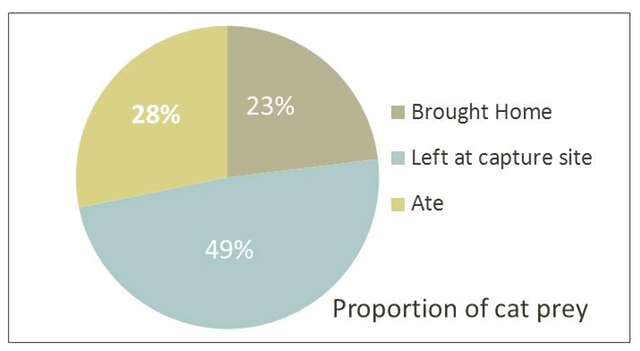 [Via the Daily News]

#cat cam
#cats
#kitty cam
#science
Do you know the scoop? Comment below or Send us a Tip