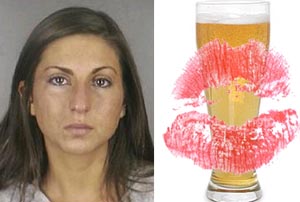 Gianna Vigliotti was swept up in Nassau County's DWI crackdown and campaign to publicly announce DWI arrests (with arrestees' names, hometowns and mugshots) in order to deter drunk driving, but it turns out the 17-year-old resident told the police her Memorial Day weekend DWI was all a mistake.

According to Newsday, Vigliotti blew a 0.15 blood alcohol level (the legal limit is 0.08) but apparently told the cop who pulled her over, "I didn't drink! I was kissing a boy who was drunk." The cop, though, found Vigliotti to be slurring and "four full beer bottles under the passenger seat of her Volkswagen and an empty beer can in her purse."

A lawyer for Vigliotti, who has a court appearance on June 18, criticized the decision to distribute her arrest information to the media, "To now have it publicized is not only embarrassing, but demeaning as well." Hopefully other people have taken Nassau County's DWI Wall of Shame to heart--Nassau County Executive Thomas Suozzi's office announced the program will continue this weekend and may do so for the foreseeable future. Suozzi spokeswoman Jennifer Kim told Newsday, "I imagine that we will be continuing to do this for a little while."