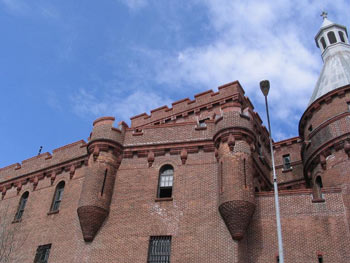 The Kingsbridge Amory in the Bronx has stood as a colossal unused edifice in the Bronx for years. The City recently negotiated with development group The Related Companies to transform the building into a commercial mall. Some residents are unhappy that a piece of their neighborhood with a lot of potential is being sold out from under them.

Members of the Kingsbridge Armory Redevelopment Alliance would like to meet with the head of The Related Companies to negotiate about setting aside some space for community use inside the building that is equal in space to a 60-story building and larger than Madison Square Garden. According to NY1, The Related Companies is spending $310 million to renovate the massive space after winning a bid for the rights.

Bronx community associations would like to see something along the lines of a Boys Club or YMCA included in the plans. KARA wants to see two schools built at the Armory, although the DOE says that additional schools aren't needed in the area.

Photo of the Kingsbridge Armory, from the BridgeandTunnelClub.com

#alliance
#armory
#bronx
#kingsbridge
#mall
#redevelopment
#related companies
Do you know the scoop? Comment below or Send us a Tip