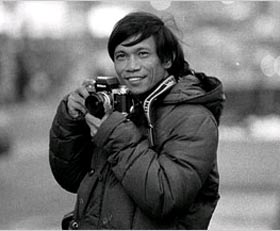 Dith Pran, the New York Times photographer whose survival of Cambodia's "killing fields" was turned into a movie, died at age 65 in NJ. Dith had been diagnosed with pancreatic cancer in recent years.

The NY Times obituary details how Dith "scraped and scrambled to survive the barbarous revolutionary regime of the Khmer Rouge" in the 1970s. Dith worked as a translator with then-NY Times reporter Sydney Shanberg and taught himself how to take photographs. Shanberg credited Dith with saving his and two other journalists' lives.

Though Shanberg helped evacuate Pran's wife and children from Cambodia, he "could not keep Mr. Dith from being sent to the countryside to join millions working as virtual slaves." From the Times:

When the Khmer Rouge won control in 1975, Mr. Dith became part of a monstrous social experiment: the expulsion of hundreds of thousands of people from the cities and the suppression of the educated classes with the goal of recreating Cambodia as an agricultural nation.

To avoid summary execution, Mr. Dith hid that he was educated or that he knew Americans. He passed himself off as a taxi driver. He even threw away his money and dressed as a peasant.

Over the next 4 ½ years, he worked in the fields and at menial jobs. For sustenance, people ate insects and rats and even the exhumed corpses of the recently executed, he said.

After escaping to Thailand in 1979, Dith became a photographer for the NY Times and became a U.S. citizen in 1986. He also started the Dith Pran Holocaust Awareness Project, to educate people about the Cambodian genocide.

The Times has a slideshow about Dith and his work in Cambodia and here in NY and NJ. There's also a Times video of Dith, as well as a video of a Charlie Rose interview with Shanberg and Dith about the trial of Pol Pot. And just a week and a half ago, the Star-Ledger interviewed him, and he urged people to test themselves for cancer, "I hope people learn from me and insist that your doctor test for cancer. Do it every six months...I am not afraid to die, but I hate to see a life wasted."

In 1980, Shanberg (who was award a Pulitzer Prize for his reporting in Cambodia 1976 and insisted he share it with Dith) wrote the NY Times magazine article, "The Death and Life of Dith Pran," which became the basis for the 1984 film The Killing Fields. Haing S. Ngor won an Oscar for portraying Dith; like Dith, Ngor was a professional (a doctor) who was captured by the Khmer Rouge and sent to the killing fields.