Kids Will Be Kids, Tongue-on-Frozen-Flagpole Edition 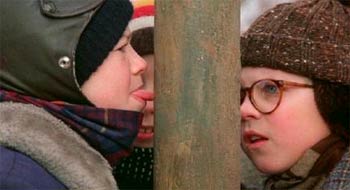 Thank goodness the weather is warming up this week - who knows how many kids will decide to see if their tongues will really stick to a frozen flagpole? Because that's what two boys in Indiana did. It's unclear if double-dog-dares were involved.

According to the AP, fourth graders Gavin Dempsey and James Alexander in Chesterton, Indiana (where it's cold) were on flag duty and decided to tempt the gods of thermal conductivity. Dempsey said, "I decided to try it because I thought all of the TV shows were lies, but turns out I was wrong." Kids and their suspicions!

Alexander's mother confirmed the two boys were inspired by the classic film A Christmas Story and said, "I can't believe he did it, but they learned his lesson." We triple-dog-dare hope so! Live Science explains why tongues get stuck to frozen flagpoles (it includes a great graphic) and one 911 dispatcher suggests just pours warm water on the area where the tongue is stuck.

And no, this story isn't specifically about NYC, but it could happen here (we suspect it has many times too!) and a corollary could be licking a subway pole (blech!). At any rate we needed to write about something light on this fine Sunday morning.