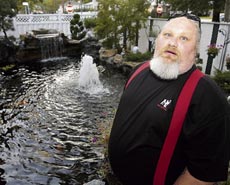 You just can't have nice things on Staten Island. When Gloria and Eric Glickman woke up Monday morning to feed the koi in their gorgeous backyard man-made pond, they were shocked to discover that between eight and 10 of their "prizewinning" (seriously) Japanese fish had vanished!

They're worth several thousand dollars, and the Glickmans, self-described "Koi-Heads," suspect foul play, even though a ransom note has yet to arrive. Police say their hands are tied because who's to say the fish weren't "casualties of the food chain"? But Mrs. Glickman tells the Staten Island Advance that theory's fishy: "Raccoons usually leave blood and guts and bones. Dogs don't eat fish. Cats don't like water...People think that because fish aren't warm and fuzzy, they're not pets, but they are and they are our pets. They're defenseless."

And her husband (pictured) is warning others to keep their koi on a short leash: "There are a lot of pond owners on Staten Island and we want them to be warned that there are koi kidnappers out there."

Photograph courtesy of the Advance

#fish
#kidnapped
#koi
#petnapping
#staten island
#stolen
Do you know the scoop? Comment below or Send us a Tip
A new Gothamist is coming! We’ve moved comments over to our beta site. Click here to join the conversation and get a preview of our new website.