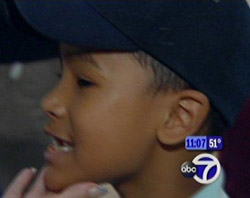 A missing 7-year-old Queens boy arrived back in NYC this week after a successful enterprise that involved the NYPD, FBI, American Embassy, a charity to track kidnapped children, and a tip to his mother's MySpace account.

Kobe Lee was kidnapped by his father, Jeffrey Salko, during a joint custody-authorized visit. Salko and Tiffany Rubin separated when their child was just four months old, and Salko was facing a six-month jail sentence for failing to pay child support when he disappeared with Kobe in August.

Rubin gained access to Salko's email accounts and learned he had gone to South Korea with their son, which cops at the 113th Precinct in Queens also confirmed. After posting queries on her MySpace page, Rubin received an e-mail tip from South Korea, saying her son was attending school there. With the help of a charity that recovers kidnapped children--American Association for Lost Children Inc.--Rubin flew to South Korea this week and was reunited with Kobe at his school. Then, after disguising him with a wig, she took Kobe to the American Embassy.

Kobe Lee was reunited with his family and relatives this week and the FBI are working with South Korean officials to have Salko repatriated to face kidnapping charges.

#embassy
#fbi
#kidnapping
#kobe lee
#nypd
#queens
#rescue
#rubin
#salko
Do you know the scoop? Comment below or Send us a Tip
A new Gothamist is coming! We’ve moved comments over to our beta site. Click here to join the conversation and get a preview of our new website.