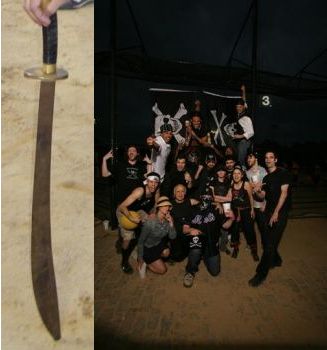 Brooklyn kickball team Los Pirates Mechanicos (pictured) are down one man as of yesterday; Lawrence Jackson (better known as Lance) was arrested for carrying around a rusty pirate sword (also pictured) in Macy's. Unsurprisingly, the NYPD took it for a weapon, not a recreational sports prop.

While the "Free Lance!" comments come in on the team's MySpace profile, the NY Post tosses around labels like "bonehead," "rabblerouser" and "kook" amongst their descriptives of the Greenpoint kickballer. Jackson was allegedly at Macy's shopping for eyeglasses with his 8-months pregnant girlfriend Teresa. The couple, who were planning to go to McCarren Park for a game post-Macy's, didn't expect any problems from carrying around the giant metal sword (surprisingly, no one had reacted to it on the subway system earlier that day).

Teresa told the paper, "It's metal, but it's a fake sword. It's not like he was going to hurt anyone." Meanwhile, the cops noted that the couple "didn't think there was anything wrong with it. He thought it was a toy. But it's not a toy. It's sharp." Reportedly Jackson frightened some shoppers, and the sword was heavy enough to make a loud noise when he dropped it.

As if being arrested for carrying around a sword meant for a kickball game wasn't enough, Jackson was also busted for marijuana possession and he has an outstanding pot warrant already! The Pirates have been known to smoke up while they play, something that's even alluded to in photos online. Kickballers take note, the Brooklyn Kickball page warns: "the pot you smoke could get ya busted. or Trouble."

UPDATE: The captain of the kickball team wrote in with the following comment.

We at Los Piratas Mechanicos (The Mechanical Pirates) ARRR like a family.We bring props, dress up like pirates, wear eyepatches and say ARRR all the time. We fly flags and throw water balloons. This is what we do. We ARRR the Pirates of Kickball. Lance has been an crucial part of this team for many years now. He was one of the first people to make me feel a part of the team I now lead. It is very unfortunate that Lance decided to take the sword and walk around with it in Macy's. The sword was actually supposed to be given to me as the official transference of captianship. So in a way I feel like it's partly my fault. We hope for his speedy release.

#arrest
#kickball
#Lance
#Lawrence Jackson
#macy's
#mccarren park
#pirates
#sword
Do you know the scoop? Comment below or Send us a Tip