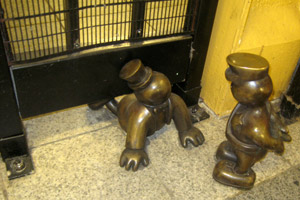 Ahead of tomorrow's vote on a proposed fare hike, the MTA finance committee committee has approved an increase in fares for subways, buses and commuter trains as well as bridge and tunnel tolls. The committee voted 5-1 in favor of the MTA's proposed 2008 budget, which includes the increased rates. The increase comes despite the authority's projected $521 million surplus at the end of the year and the possibility of another large surplus next year without a fare hike. Despite projections that put the agency in the black, it says they face a deficit in 2009.

The committee also shared some yearly ridership numbers comparing this year with 2005:

They blamed the construction projects and old subway cars for the poor performance numbers. But if the MTA is to be believed, relief is coming.

New York City Transit announced yesterday that they would improve subway and bus service during the 2nd half of 2008 assuming the MTA's finances improve or remain steady during the 1st quarter of 2008 after the fare increases. Improvements would include more frequent subway and bus service, increased service on some subway lines (like the G), an extension of some bus routes, and a new bus route in Manhattan - the M13 from the L.E.S. to East Midtown. These improvements would roll out at different times.

While the MTA/NYCT claims that they will improve service with the pending fare hike and that they need the funds to stave off a deficit in 2009, we wonder whether subway service will actually improve with the hike.