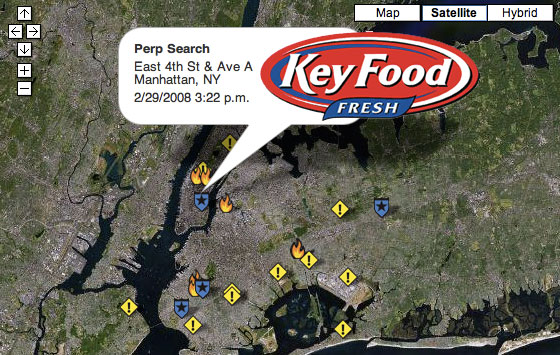 Two female Key Food employees at the Avenue A and East 4th Street store were attacked by a knife-wielding man. The police originally said one of the woman died, but it turns out that one is "clinging to life" while the other is in critical condition.

The Sun reports the women were in the "elevated manager's booth" when the attack took place at 3:15PM. According to WNBC, the attacker may have been a delivery man or employee, wearing a green jacket with the Canada Dry logo. The Sun got this comment from the store: "We can't give any comments right now. ... I'm doing ten things right now. We're still in the middle of talking to police."

Police are looking for the suspect, who fled on foot, with police dogs. Both victims are at Beth Israel in critical condition. The 25-year-old victim is in grave condition while the other was slashed in the torso and leg.

#avenue a
#beth israel
#canada
#crime
#east village
#food
#key food
#murder
#stabbing
#the sun
#wnbc
Do you know the scoop? Comment below or Send us a Tip