For the last 40 years, Elaine Condengio has worked as a meat wrapper at the Key Food grocery store in Floral Park, Long Island. But for the past two weeks, she says that she and her fellow employees in the meat department, butchers and wrappers among them, haven't been able to do their jobs because their employer has locked them out in an ongoing union contract dispute. "We thought we were all family here," Condengio tells Gothamist. "To get treated like this is not right."

Forty meat department workers across seven Key Food locations in Brooklyn and Long Island say they've been barred from working since the weekend of April 6th, as owner Benjamin Levine intends to slash their healthcare and pension benefits. Workers in the meat department have been without a contract for years, according to Lisa O'Leary, the Secretary Treasurer of UFCW Local 342, the union representing the workers.

In early March, the union filed charges against Pick Quick Foods Inc., the owner of said Key Food locations, for their apparent failure and refusal to bargain (the grocery store's many locations throughout the boroughs are not owned by the same company). O'Leary says that management cancelled union contract negotiation dates both in March and April, and on April 6th, workers picketed out front during their lunch break. When they tried to clock back in, they weren't allowed to come back to work, and they were locked out completely the next day, she says. The list of locations where meat department workers are locked out includes Greenpoint, Sunset Park, and Park Slope, Brooklyn, according to UFCW Local 342.

The union and Condengio alike both mention that there had been no issues with management and their contract until after Levine took over Key Food ownership from his father, Jules, who passed away in 2010. For many of Key Food's meat department mainstays who've been working there for over 20 years (if not longer), the move particularly stings. "This particular owner of the Key Food [locations] that are locking the employees out just...does not want to recognize people’s seniority, and does not want to recognize how hurtful that is," O'Leary says.

Since then, locked-out workers have taken to picketing in front of several Key Food locations. Earlier this week they held a rally at the Key Foods in Park Slope, on 5th Avenue between Baltic Street and Sterling Place. Out front, and in flyers that have been physically circulating throughout the neighborhood and online through NextDoor, they urged customers to shop elsewhere until management let employees back to work and gave them a fair deal on their contract. "They’re not looking for any big gains, they just want to have dignified work and health insurance," says City Council Member Brad Lander, who represents the district. "And for [the owner] to force them to work without a contract then lock them out is really rotten. I hope he’ll understand that it’s not just the workers but the customers, too, that expect him to do the right thing here."

Signs currently emblazoned on the Park Slope location's windows refer to the union as a “bully,” and call the supposed cuts to pay and benefits "PATENTLY FALSE...ALL LIES!!!" It’s unclear where the signs originated. Employees at the 5th Avenue store declined to speak with Gothamist for this story. 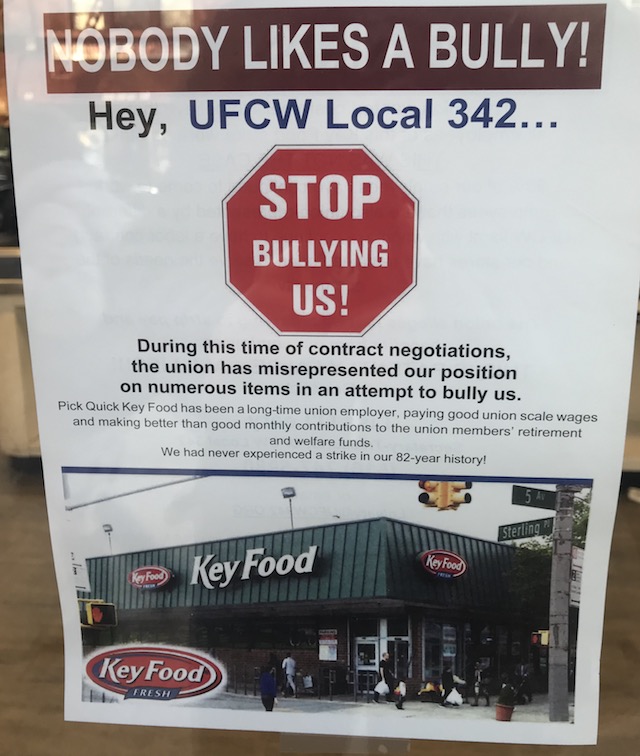 One of the signs on the windows at the 5th Avenue Key Food location, in Park Slope. (Paula Mejía/Gothamist)

It's worth noting that the Park Slope Key Food will not be there for much longer. The Real Deal reports that the lot that currently houses the Park Slope Key Food store will be razed to make way for two new residential towers with 165 apartments (among them, 41 will be affordable housing units). The new building will include a grocery store, following a big push from the community, but it's unclear whether that will be helmed by Key Food. "In terms of a long term plan, I think he expects to take advantage of some of the real estate increase in value," Lander adds. "And to be nickel and diming his employees about their healthcare? That’s not just an acceptable way to do business."

For now, both locked-out employees and the union see no end in sight to the scuffle until they reach a deal with management. They plan to keep picketing, and likely rallying at another location soon, until something budges. "We’re out here walking, [and] a lot of people are honoring us, because I’ve known them for years, they won’t go in and buy meat," Condengio says. "But it’s horrible being out here when you know nothing’s happening."

#key food
#long island
#meat department
#park slope
#picket
#strike
#union
Do you know the scoop? Comment below or Send us a Tip