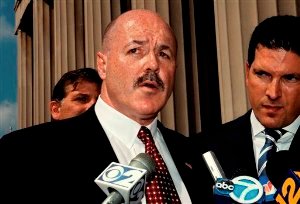 A grand jury voted to indict former police commissioner Bernard Kerik on federal corruption charges yesterday and, this morning, he surrender to the FBI in White Plains. The indictment was sealed, but the 16 counts include charges of "conspiracy, mail fraud, wire fraud, tax fraud and making false statements."

The U.S. Attorney's office, which sought the indictment, and the FBI are giving a press conference now; U.S. Attorney for the Southern District of New York Michael Garcia is making the point that the charges were brought against Kerik because he was a top city official and applied to high federal positions. According to WNBC, the charges include not claiming more than $500,000 in income on his tax returns, including the more than $200,00 from NJ contractor Interstate interested in a city contract, plus:

Former mayor Rudy Giuliani, who has been a staunch supporter of Kerik, even through his troubles, told ABC News he did make a "mistake" in not thoroughly vetting Kerik. Giuliani added, "You have to judge that in the overall context in everything that I did, and how many right decisions did I make and how many wrong decisions did I make. And the balance is very much in favor of -- I must have been making the right decisions if the city of New York turned around. If crime went down by 60 percent, if homicide went down by 70 percent...I made mistakes when I was the mayor, and I make mistakes as a candidate, I will make mistakes as a president"