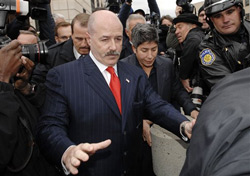 Former New York City Police Commissioner Bernard Kerik was indicted in federal court yesterday and the U.S. Attorney prosecuting him pulled no punches describing his legal prey. "In meticulous detail, Manhattan U.S. Attorney Michael Garcia assembled count after count painting Kerik as a money-grubbing liar who tried to cover his tracks." Kerik allegedly had a mob-controlled contracting firm renovate his apartment for free, while telling city investigators that that same firm had no criminal ties. He's being charged with tax fraud, conspiracy, making false statements, and depriving the city of his honest services. If convicted on all 16 counts, he could face 142 years in prison and be charged with almost $5 million in fines.

Outside the federal courthouse in White Plains, NY where he pleaded not guilty, Kerik brought up the attacks of 9/11/01, saying that his legal problems were the most difficult for him since the day when thousands of New Yorkers were killed. It was on Rudy Giuliani's coattails as a purported 9/11 hero that Kerik was nominated as the head of Homeland Security by the Bush administration. That nomination was quickly abandoned when Kerik's allegedly shady transactions began to surface.

The New York Times has a personal profile of Kerik, in addition to details of his legal troubles. It's relatively unflattering, portraying a man who throughout his career used personal relationships and professional position to enrich himself at almost every turn. He even used an apartment near Ground Zero--donated to the city as a resting spot for recovery workers --as a trysting location with Judith Regan, the publisher of his memoir.

His association with Kerik is proving to be an enduring liability for Rudy Giuliani in his run for the Presidency. In particular, Sen. John McCain pointed to Kerik as symbolic of Giuliani's lack of good judgment, especially in sending Kerik to Iraq to oversee the training of Baghdad's police force. That brief foreign misadventure is widely viewed as a failure.

If one would like to assist Bernard Kerik with his legal bills, donations are being accepted via his web site.