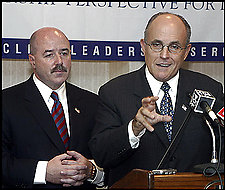 Former police commissioner Bernard Kerik's misdeeds continue to plague Rudy Giuliani's Presidential ambitions, with news that the former Mayor knew that his one-time right hand man vouched for a mobbed-up construction company before appointing him police commissioner. Before Kerik was appointed commissioner, one of Giuliani's top aides was made aware of the fact that Kerik––while commissioner of the Corrections Dept.––met with mayoral aides in a Tribeca bar and defended Interstate Industrial Corp. of criminal wrongdoing, as the firm was undergoing a criminal investigation and also undertaking a $165,000 renovation of Kerik's apartment. While at Walker's [the bar], Kerik allegedly said "If I thought Interstate was mobbed up, do you think I'd let my brother work there?" A city investigation of Kerik's conduct eventually cleared him of wrongdoing, but Giuliani has previously claimed that he didn't know about the matter.

Both Kerik and Giuliani's reputations were galvanized in the hours of 9/11 when they walked elbow to elbow through billowing dust in downtown Manhattan. Since then, most people associated with the former police commissioner have seen their reputations tarnished. President Bush's failed attempt to make Kerik Homeland Security head was a political disaster. Publisher Judith Regan, who was having an affair with Kerik in his downtown apartment lost her job, albeit more due to OJ Simpson than the commish. And even "The Tombs" removed Kerik's name from outside its Manhattan jail facility.