Emotions were high last night at Brooklyn's first CB1 meeting of the year. The ongoing controversy over the Kent Avenue bike lanes and the recent, sudden dismissal of Teresa Toro, who had chaired the Transportation Committee, inspired members of the local community to crowd the small room at the Swinging 60's Senior Citizens Center, waiting for their chance to speak to the board.

"It's an outrage," cried someone in support of Toro. "For Teresa, it's always been about what's best for this community." Any opposition to the Kent Avenue bike lanes was drowned out by dozens of cycling residents who came to praise the safety that the lanes have brought to their commutes. "If pressure is high on this subject, it's because of the fear of getting killed," said the father of a six year old cyclist.

The latest spark in the Kent Avenue debate was a letter sent out by city officials and one executive member of CB1, asking the DOT to temporarily remove the northbound lane until a solution could be agreed upon with the community. This letter, and the proposed removal of the bike lane, had never been approved by full the board, and Toro made that point clear when she was subsequently approached by the press for comment. Two weeks later, Toro received a phone call saying she had been removed from the board.

The Kent Avenue bike lane was not officially on last night's agenda, and the few people who had come to speak about other subjects felt so out of place at the meeting that even they decided to get involved. A spokesperson for a mental health outreach program decided to give his two cents: "As far as this Teresa Toro thing, it sounds like a sketchy dismissal. It makes us look kind of bad if we just dismiss someone like that." 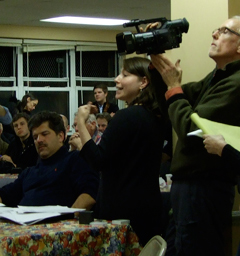 The fun really began when board members made a motion to reinstate Toro. When this was refused, they challenged the executive board to explain Toro's dismissal, and the letter that had been sent out without board approval. Vincent Abate ("Vinny"), Chair of the Executive Committee, initially tried to dismiss the whole thing, declaring, "I have the authority to make executive decisions and to dismiss people. That's it."

As concerns over communication, how to proceed, and how the board was being viewed in the press rose to an emotional peak, Teresa Toro, who had been watching the proceedings the entire time, was finally given the chance to speak. After going through the series of events leading up to her dismissal, she closed with the statement, "My first obligation is to the community and the truth. I haven't done anything wrong."

Vinny, who will be leaving the board this year, had the final word. "I've got four months to go; I don't want to leave a fractured board. I'm not telling you right now what I'm doing, but I never leave an organization with unfinished business, and this is unfinished business... Don't worry about it." With the Kent Avenue bike lane and Teresa Toro's future with the board still up in the air, that might be difficult advice to follow.

At top, a local resident voices opposition to the Kent Avenue bike lane, at bottom, Teresa Toro addresses the board.

#bike lane
#cb1
#kent avenue
#Teresa Toro
#transportation alternatives
Do you know the scoop? Comment below or Send us a Tip