The New York Red Bulls faced the final hurdle of their grueling three-game week on Saturday afternoon, hosting the resurgent Philadelphia Union in an I-95 clash. With perfect weather and a raucous crowd, the Red Bulls soundly beat Philadelphia 2-0, with Kenny Cooper finally ending his scoring drought with two goals.

Cooper hadn't scored in seven games, dating back to the May 23rd game against Chivas USA. While the 28 year old striker is known for scoring primarily with his feet, both of his goals on Saturday came from his head. He now sits with a season total of 13 goals, second only to San Jose's Chris Wondolowski (who has 17) in the league race for the Golden Boot.

Despite Cooper's performance, his performance was almost overshadowed by that of academy product Connor Lade, who brought an unstoppable energy that frustrated the Union at every turn. Chasing every ball and refusing to give up, Lade had the crowd at Red Bull Arena roaring at his every touch by the end of the game. It didn't hurt that he had a hand in both of Cooper's goals, nailing a perfect cross on the first and feeding Thierry Henry to set up the second. 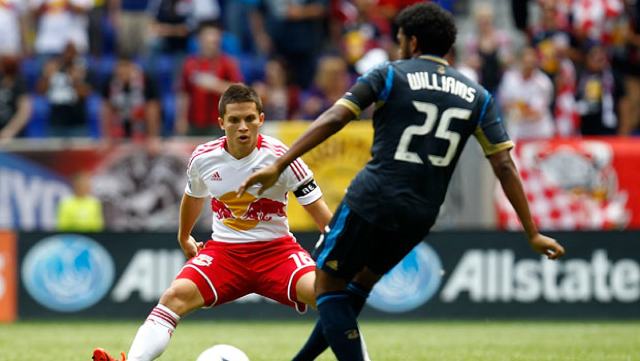 While many in the Red Bulls fan base lament Coach Backe's sometimes confusing player management and substitution strategies, it must be mentioned that both Cooper and Lade started the Wednesday match against Chicago on the bench, only seeing limited minutes. In what was easily the toughest week of RBNY's 2012 season, with hazardous weather for two of the three games, and with so many injuries hampering depth, holding Lade and Cooper back on Wednesday ended up being very clever.

Every member of the Red Bulls stepped up, even with most having already logged 180 minutes this week. Bill Gaudette, once again filling in for Ryan Meara, only needed to make two saves but one was vital, denying Josué Martinez with a kick save. Wilman Conde and Markus Holgersson repeatedly shut down what limited attack Philly managed. Joel Lindpere and Dax McCarty choked Philly's midfield play, and Sebastian Le Toux and Thierry Henry looked dangerous all afternoon.

Philadelphia, despite being on a three-game win streak, looked lost. With star striker Freddy Adu not traveling with the team (for reasons described as a "team issue"), the Union failed to have a cohesive attack, and gave New York an abundance of space in the midfield. Some Union supporters have opted to blame the loss on referee Hilario Grajeda, specifically griping about a questionable offside call that denied Antoine Hoppenot a goal late in the match. But with only two shots on target the whole match, one might wonder if they should focus more on the guys in the Bimbo-sponsored jerseys.

It wouldn't be a 2012 Red Bulls game without someone picking up an injury, and tonight's victim was defender Brandon Barklage, who was forced off after just 16 minutes with a hamstring strain. Jonathan Borrajo took his place and did an admirable job for someone seeing the field for the first time. But the overall number of injured should decrease soon, as Teemu Tainio, Heath Pearce, and Jan Gunnar Solli are all nearing returning to the lineup.

The win pushes the Red Bulls record to 11-5-5, who now have more wins in 2012 than they did in all of 2011, with 13 more games to play. With DC United losing and Sporting Kansas City held to a scoreless draw Saturday, the Red Bulls now hold first place in the Eastern Conference for the second time this season. They also remain undefeated at home, with an impressive 7-0-3 record when playing at Red Bull Arena.

With the three match gauntlet behind them, the Red Bulls can relax some this week, with the next league match coming on Saturday away to Montreal. The match will be their final meeting of the season; the Red Bulls have won both of the previous matches. Thierry Henry will also feature mid-week in the MLS All-Star Game (7/25, 8:30 PM, ESPN2) against Chelsea FC.

Red Bulls Coach Hans Backe, on the team's form: "If we can keep this home record, we will get into the playoffs. I think we still, every player, coach, we want to be better. We're picking up results, but still we just have the feeling we need to be better in our attacking game, in our possession, we need to be more precise. I think we can defend quite okay, even if we've conceded I think 29 goals, which - too much. So let's see now."

Union Interim Coach John Hackworth, on the loss: "I thought we did an okay job trying to control the tempo and rhythm. We were not so good in the final third. Our last pass evaded us all night, and that was our downfall ultimately."

Kenny Cooper, on ending his drought: "I think it's important to always stay positive. I have so many quality teammates around me, and I have so much confidence in them, and you see today the opportunities that they're able to create for me. The two finishes were just yards outside of goal, and you see their great quality in the pass."

Connor Lade, on being an instigator: "I'm a small guy, I've kind of been fighting my whole life, you know, bigger guys. That's just something, I try to just work harder. If it pisses people off, so be it. They're going to have to deal with it."

Thierry Henry, on the growing chemistry with Cooper and Le Toux: "There is definitely something coming on. I think at times, having those guys, including me obviously on the field, we're kind of exposed. But if we keep on finding the net, it can be great."

Thierry Henry, Connor Lade's #1 Fan: "I told you, he's the man of the season for me, by a distance. I don't know what else I can say. He works in training, I like his attitude, he comes early, stays. He fights for every ball. You can see his desire. Always open, turns, he goes forward. He wants to win. He has everything that you want to see in a player. Plus, the ability obviously - he can play with his right, he can play with his left. What a cross he put for Kenny on the first goal. That's the kind of player you want to have on your team."