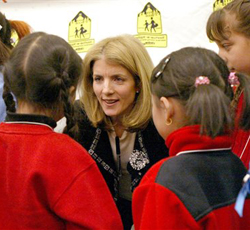 The Times reports that Caroline Kennedy, a hopeful replacement for Hillary Clinton's Senate seat, "is declining to provide a variety of basic data, including companies she has a stake in and whether she has ever been charged with a crime." The paper points out that if she were applying for a job in the Obama administration, she'd have to "fill out a 63-item confidential questionnaire." Or if she were running for actual election, she would "have to file a 10-part, publicly available report disclosing her financial assets, credit card debts, mortgages, book deals and the sources of any payments greater than $5,000 in the last three years."

The usual federal campaign-finance rules don't apply here because Kennedy is seeking an appointment. (And as a Kennedy, "rules" generally don't apply anyway.) But to give everyone a sense of the kinds of numbers we're talking about here, the Center for Responsive Politics notes that her uncle, Senator Edward M. Kennedy of Massachusetts, has revealed a net worth of over $43.8 million, making him the seventh richest senator. Bob Edgar at the watchdog group Common Cause tells the Times: "If this were an open primary, and all the people seeking that position had to run, she’d have to make all those disclosures, so why not in the appointment process? She can’t simply ride in on her name recognition or place in history."

Oh, can't she? On her "get to know me (superficially)" tour upstate, Kennedy has taken only 11 questions from reporters, has granted no interviews, and responded only in writing to other substantive questions about her political positions. But that's good enough for Mayor Bloomberg, who told reporters yesterday, "The governor should make a decision reasonably quickly because this is just getting out of control." And that decision should be to appoint Caroline Kennedy, because she "is eminently qualified to be a senator." According to Bloomberg, it doesn't even matter if she's inexperienced or uninformed, because "being a senator, you don't have to know about every issue coming in. That's what your staffs are for."

#caroline kennedy
#Clinton replacement
#governor paterson
#hillary clinton
#peter king
#senate
Do you know the scoop? Comment below or Send us a Tip