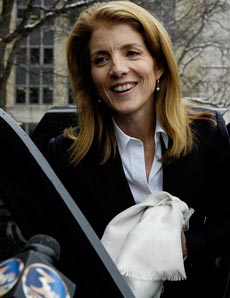 Of all the people for Caroline Kennedy's people to piss off, probably pissing off Governor Paterson, who makes the final call on who gets Hillary Clinton's soon-to-be vacated Senate seat, is a bad idea. Yet the NY Times reports that he's not very happy:

The governor is frustrated and chagrined, the advisers said, because he believes that he extended Ms. Kennedy the chance to demonstrate her qualifications but that her operatives have exploited the opportunity to convey a sense that she is all but appointed already. He views this as an attempt to box him in, the advisers said.

“You have people going around saying, ‘Oh yeah, it’s a done deal,’ ” said one of the advisers, who requested anonymity because they were not authorized to speak publicly about the selection process and did not want to anger the governor. “The quickest way to not get something you want is to step into somebody’s face.”

The article has a special shout-out to Mayor Bloomberg's aide Kevin Sheekey for raising Paterson's ire by reporting calling a labor leader and telling him/her to get on the Kennedy bandwagon "now."

Speaking of Bloomberg: Assembly Leader Sheldon Silver isn't a fan of Kennedy's and made it clear he thinks the mayor is behind her Senate bid, "I think the undercurrent would be, if I were the governor, to see that she's being promoted by the mayor and by his deputy mayor. If I were the governor, I would look and question if this is the appointment I would want to make, if her first obligation would be to the mayor of the City of New York rather than to the governor."

And while Kennedy has "declined" to disclose her financials, the Daily News estimates her private wealth to be $100 million, which includes a 366-acre estate on Martha's Vineyard (from her mother), her share of her father's family trust (the one started by Joseph Kennedy), and her share of her brother's estate.