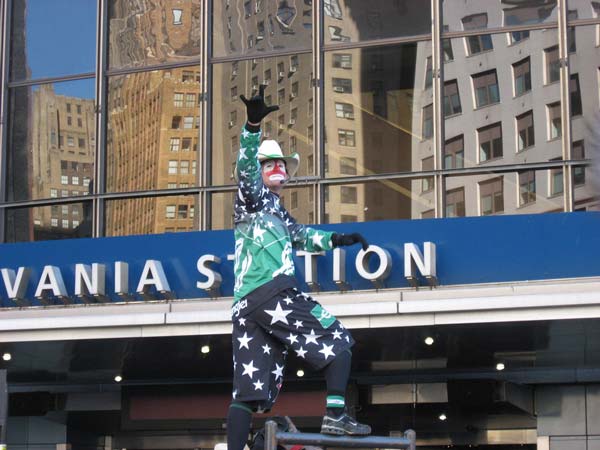 Untitled photo of rodeo clown, by Zodak at flickr

According to WNBC's Jonathan Dienst, Police Commissioner Ray Kelly wrote a letter to the MTA, MSG, Amtrak, and Vornado Realty expressing his dismay over the lack of Penn Station security. Three years after funding had been secured for the construction of a legitimately effective security barrier to protect Penn Station from a truck bomb attack, Kelly says little has been done to implement any plans.

He did commend the MTA for getting money for a cordon around the transit hub but expressed frustration nothing else had been accomplished. From his letter:

Fortunately, the M.T.A. has already secured the funds needed to install the perimeter, but I have been informed that your representatives have yet to finalize an agreement on how the installation will occur and the perimeter will operate. My staff has had multiple meetings with your representatives but there is still no resolution to the handful of issues holding up the agreement.

This impasse has gone on for too long. I urge you, as the owners and the principal operators, to strike a reasonable compromise that will finally permit the security perimeter to be installed.

Most involved in the non-implementation are singling out James Dolan of MSG for holding up construction of a security perimeter. A spokesperson for the MTA said "The Garden has refused to accommodate the security plan, and we cannot proceed with this important project without their permission and cooperation." Vornado Realty and Amtrak declined to comment.

Hundreds of thousands of people pass through Penn Station everyday. A worst-case scenario could involve Dolan placing an underemployed but highly paid employee under contract (e.g. Isiah Thomas) in charge of implementing Penn Station security plans. And if so, God help us all.