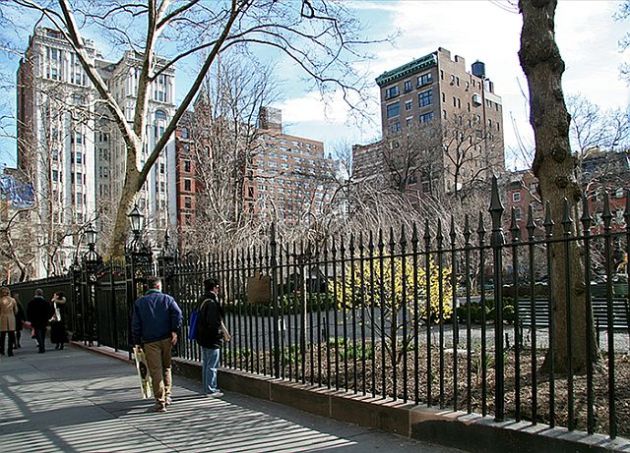 Meet Arlene Harrison, the self-described “Mayor of Gramercy Park.” She’s the one to talk to if undesirables are spotted infiltrating the private oasis, which requires a key for entry and exit, as two women recently discovered when a maintenance worker ejected them during their Saturday picnic. How did he know they were not quite the right material? They were probably breaking the rules by enjoying the park.

Harrison, who runs the Gramercy Park Block Association, would never enter it for such crass purposes. The Times spent a snobby day with her as she made her daily 6:30 a.m. to 8:30 a.m. rounds to confer with the supers and property owners who hold coveted keys to Manhattan’s only private park. She explains that she rejected a proposed playground because it's "too much wear and tear. The children who grow up here learn to use their imagination." And the park should be used (enjoyed?) as little as possible because it “was always an ornamental park...like a hotel room with a view of the ocean.”

Besides outlawing Frisbees, soccer balls, and other imagination-impeding devices, the profile goes on to detail a bitter feud between Harrison and the president of the National Arts Club, whose “populist agitations” would turn the fastidiously manicured park into a place for parties and dancing. Not on Harrison’s watch – she started the block association in 1994 after her son was violently mugged in front of her building. Which speaks volumes about her crusade to impose a bit of flawless order on an always unpredictable city.

#Arlene Harrison
#gramercy park
#manhattan
#national arts club
#private park
#rules
Do you know the scoop? Comment below or Send us a Tip