FDNY Battalion Chief Dan Murray is now a hero in the animal rescue community after he kayaked out into the middle of the Hudson near the Tappan Zee Bridge to rescue an injured snow goose that had been left behind by its flock. Nyack resident June Gooch-Wagenberg had spotted the lone goose last month; she'd been leaving food for it in her spare time but had been unable to find any animal rescue group who would come save it. The goose's wing was injured, preventing it from flying south to join the others.

Snow geese migrate to warmer climes in the winter, and after three weeks had passed, Gooch-Wagenberg feared the goose would soon perish. Here's an account from a newsletter distributed by the Wild Bird Fund, a NYC-based non-profit that helps rehabilitate injured wildlife:

June knew time was running out. She spent hours contacting every local organization associated with animal welfare, but no one could help. They were happy to accept donations but unable to rescue or take in animals. As well, at this time of year, it’s tough to find anyone in Nyack who still has a boat in the water. Desperate and all alone like the animal she was trying to help, she began to strategize - she was going to rescue the snow goose no matter what.

Three weeks passed. The goose continued to hang around, and June kept feeding it, but the wing showed no sign of improvement. One Saturday, luck just happened to be parked out on the street in the form of a big red kayak on a car. June needed to find the owner, and so she staked out the car.

The afternoon wore on to darkness, and June was close to giving up when the owner appeared. He turned out to be Dan Murray, FDNY Battalion Chief in Manhattan, and he was happy to attempt the rescue. But the route was treacherous. He had to kayak into the middle of the Hudson, amid commercial ship traffic, to approach the goose from offshore with a net attached to a long pole.

After dodging ship traffic, battling the strong current, and trying to capture and calm the flapping bird without worsening its injury, Dan was able to get the goose aboard, wrap it in a towel, and bring it to shore. This truly heroic rescue required great courage and kindness. 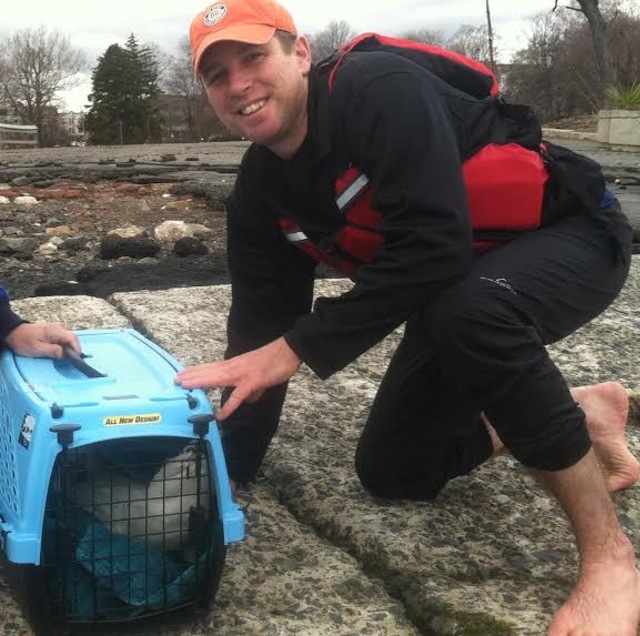 The Wild Bird Fund has been rehabilitating the snow goose, which they've named June after its guardian. (Tough break, Chief Murray.) Rita McMahon, Executive Director of Wild Bird Fund, says they don't know what caused the wing injury, but tells us, "In most of these cases we presume it got hit by a car."

They're currently waiting to see whether June's wing will heal, but in the weeks since it was broken the bone has set in the wrong position. In the meantime, the goose goes swimming in an indoor pool twice a day, followed by sunbathing under a sun lamp. And although June's living conditions have improved significantly, the goose doesn't seem particularly grateful.

"She's a little fierce," says McMahon. "She's definitely wild. She does not want anything to do with us. We're keeping her in a quiet corner so she can contemplate the pool and the wall and the sun lamp. But aside from the wing she seems to be in great shape." 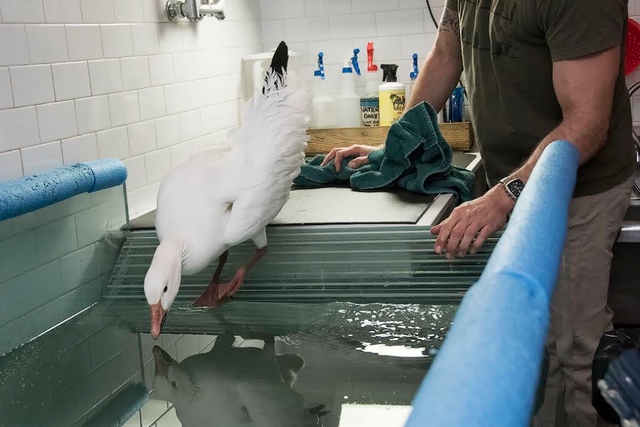 If in fact June is unable to fly again, she'll be transferred to a sanctuary upstate (which we really hope isn't a euphemism for something).

If you'd like to support the Wild Bird Fund, the group is holding a fundraiser at the Cutting Room in Manhattan tomorrow night, January 20th.

#barts people
#fdny
#snow geese
#snow goose
#original
Do you know the scoop? Comment below or Send us a Tip