Photograph of the Brooklyn Bridge waterfall by John Del Signore; you can see the safety line

Yesterday, we noted that two kayakers were rescued from the temporary Brooklyn Bridge waterfalls yesterday afternoon, and now there are some more details: The novice kayakers, in a two-man kayak, had been in a group of kayakers paddling from Governors Island to DUMBO and wanted a closer look at the falls. Their group's leader, Erik Baard, described Bert Rosenblatt and Vladimir Spector as "goofing around."

When Rosenblatt and Spector got too close to the falls, they became sucked in by the powerful pump that drives the falls and the East River's currents and capsized. The safety zone around the waterfalls had also shifted due to the current. 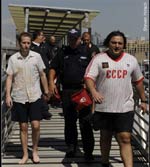 Once in the water, the pair dropped their paddles and allowed their kayak to drift away, both of which are basically what you are not supposed to let happen when one capsizes. When an NYPD rescue boat motored up to disperse the gathering of kayakers clustering near the falls, they saw Rosenblatt and Spector hanging on to the safety buoys surrounding the art installation.

Fortunately, both men were wearing life jackets, but the frightened men were unwilling to let go of the safety barrier until ordered to do so by police. After turning off the pump that powers the waterfall, the NYPD Harbor Unit towed the men away from the art installation with life preservers and then pulled them from the water.

The NYC Waterfalls, designed by Olafur Eliasson, will be on display until October 13. Perhaps to reassure other kayakers, the Daily News reports, "Despite the scare, police said there was no risk of actually being pulled into the falls' suction system. Cops tested the system with dummies that were not sucked in."