Dozens of volunteers and Board of Elections employees gathered around a folding table inside the Metro Mall in Middle Village, Queens on Thursday morning, cheering as a staff member counted the final paper ballot in a two-week recount of roughly 91,000 ballots to determine the Democratic candidate for Queens District Attorney.

The ballot, cast in Queens Assembly District 39, happened to be for Borough President Melinda Katz. A few hours later, Katz would declare victory in the neck-and-neck race, just as insurgent public defender Tiffany Cabán told reporters gathered outside on the sidewalk that she will not concede without a court fight. “This race is not over. It is far from over,” Cabán said.

Both campaigns tell Gothamist that the margin is now roughly 60 votes in Katz’s favor. The Board of Elections is planning to certify the manual recount results early next week, BOE spokesperson Valerie Vazquez said. She declined to provide an unofficial recount result.

“Now that every valid vote has been counted and recounted, the results confirm once again that the people of Queens have chosen Melinda Katz as the Democratic nominee for District Attorney,” spokesperson Andrew Kirtzman said in a prepared statement. 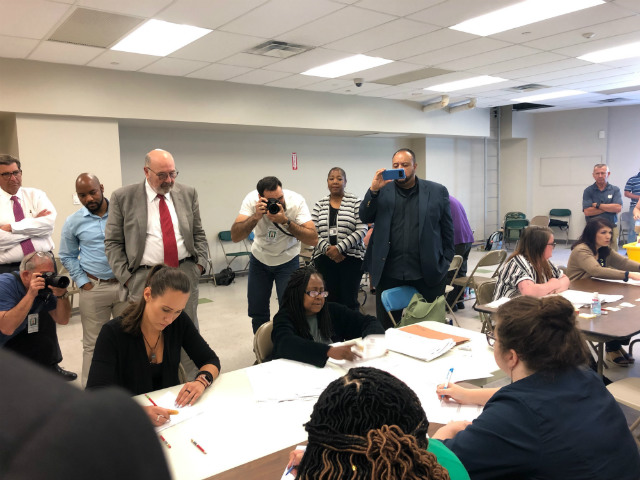 Still, a final outcome in the closely-watched race is days, possibly weeks away. Cabán initially declared victory in the June 25 primary, leading by fewer than 1,100 votes. But Katz pulled ahead by a razor thin margin of 20 votes when absentee and affidavit ballots were counted a few days later, prompting a mandatory manual recount. (Affidavit ballots are filled out when a voter’s name does not appear on the voter rolls at a polling site.)

Cabán lawyer Jerry Goldfeder confirmed Thursday that he plans to contest individual ballots in court, though he declined to get specific, saying only that “we will bring to the court’s attention more ballots than this margin.”

“People who didn’t fill out their ballots absolutely precisely correctly, their votes were invalidated erroneously,” Goldfeder said, hinting at potential arguments. “And people were told to go to the wrong polling sites. Registered voters. Democrats.”

Throughout the recount, attorneys for both candidates have also strategically objected to the BOE’s ruling on specific ballots, debating whether a voter’s intent is clear.

Goldfeder declined to say Thursday how many Katz ballots he has challenged, but said that he believes the BOE erroneously invalidated “dozens” of Cabán votes.

A court date before Judge John G. Ingram in Queens Supreme Court is scheduled for Wednesday, August 6. Gothamist spoke Thursday to two affidavit voters who are prepared to testify for their ballots to be counted. Both voted for Cabán.

Mark Miller, a 48-year-old musician from Astoria, said he learned that his affidavit was not counted when the Cabán campaign contacted him after election day. An 11-year resident of Astoria, he says poll workers sent him from his typical polling place at Frank Sinatra High School to a nearby polling place at PS 166. He ended up filling out an affidavit ballot at PS 166, at a poll worker’s advice, his cranky toddler in tow.

“The people at Frank Sinatra are telling me to go to PS 166, which was wrong,” he recalled. “And the people at PS 166 were saying, ‘Do this ballot here, it will count.’ Which was also wrong.”

“I’m happy to help in any way I can,” he added. “I think in a Democracy you want to count all the votes.”

Katz spokesman Matthew Rey did not immediately confirm whether Katz’s legal team plans to fight for individual ballots in court.

Thursday’s process inside the Board of Elections counting facility was multi-step. Before lunch, staff finished counting the last three of 18 Queens assembly districts: 37 and 39 in Western Queens, where Cabán won by strong margins, and 40, in Flushing. Next, staff manually entered the counts into an Excel spreadsheet, projected on a flat-screen television. Meanwhile, lawyers for both campaigns reviewed objected ballots in a closed-door meeting. 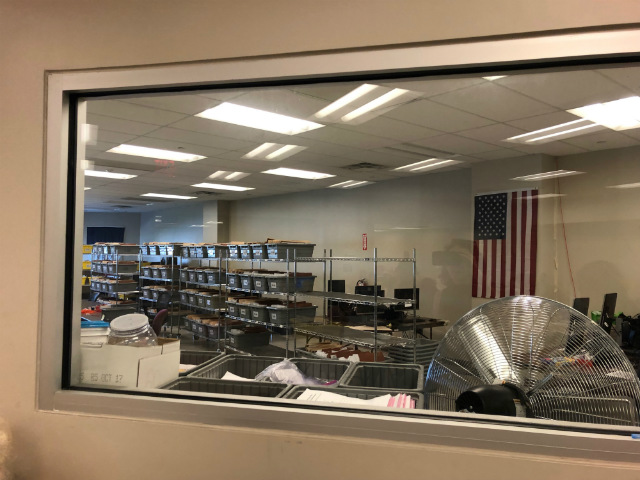 The recount and weeks of post-primary legal work have proven time consuming and costly for both candidates. Katz has a financial advantage, however, with substantial amounts of free legal representation from Queens Democratic Party attorneys. Cabán’s campaign has already spent $85,000 on legal fees.

Cabán herself is also feeling the pinch, she told Gothamist on Thursday. She is on unpaid leave from her public defender job, and says she wouldn’t feel comfortable taking on clients right now, not knowing if she’d be able to see their cases through to completion.

“There are some folks who think that me being really transparent and honest about my own personal situation is some sort of sign of weakness,” she said. “And I think that no, this is just reality. People like myself, working class people who don’t have a safety net... these are the very people that are lacking in representation in our elected spaces.”

Volunteers for both campaigns were feeling hopeful and emotional on Thursday.

Fred Dewey, 62, flew to New York City from his home in North Carolina this week to volunteer for Cabán. He said he was inspired by a wave of anti-carceral district attorney candidates across the country, who Cabán is aligned with. “As soon as I start talking about it I start tearing up,” he said. “I’m really excited about this new energy that is happening."

Tyquana Rivers, a Katz volunteer from Southeast Queens, wore an emerald green sweater on Thursday — the same sweater she says she was wearing on July 3rd when Katz pulled ahead by 20 votes. She said that the election reminds her of an earworm of a song from the 1990s children’s television show Lamb Chops’ Play-Along, called “The Song that Never Ends.”

“This is the election that never ends,” she said.

#Melinda Katz
#queens da
#queens da primary
#Tiffany Cabán
Do you know the scoop? Comment below or Send us a Tip