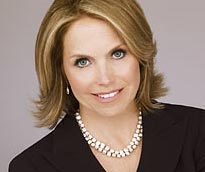 The AP notes how CBS Evening News anchor Katie Couric has been hitting a new high note in her career with her series of interviews with vice-presidential candidate Sarah Palin and is finally getting respect. (It's better than rumors that she's moving on). Couric, though, says, “I’ve never really lost confidence in my abilities, which I guess is pretty miraculous. I didn’t really have a lot of platforms to do what I excel at, which is talk to people and do interviews.”

In the latest interview with Palin, Couric asked the Alaskan governor about her views on abortion (Palin would still advocate against abortion if a 15-year-old were raped by her father), evolution (it should be taught as accepted scientific principle, but "I won't ever deny that I see the hand of God in this beautiful creation that is Earth, especially coming from one of the most beautiful states in the Union and traveling around this country also in this last month"), and her church's stance homosexuality (she says it wasn't her church that said gays could be converted to heterosexuality--plus she has a gay friend, "I am not going to judge Americans and the decisions that they make in their adult personal relationships"). The video is below; transcript of unedited material here.

Couric also asked Palin about what media she reads to inform her world view; video is after the jump:

Couric said on the Early Show this morning that Palin believes the media coverage from the "media elite, the Washington elite" is biased because she's not a known quantity.

#cbs evening news
#interviews
#katie couric
#media
#sarah palin
Do you know the scoop? Comment below or Send us a Tip