On Thursday morning, the prosecution in the case against Chanel Lewis for the murder of Karina Vetrano rested. Over seven days of testimony, the prosecution laid out their evidence against Lewis, which includes a confession, DNA found at the crime scene, and cell phone data which proves he was in the general area of the murder. Later that same morning, the defense also rested their case after calling just a single witness, whose testimony lasted under ten minutes.

Throughout the trial, the defense has struggled to overcome strenuous objections by the prosecution regarding evidence that could cast doubt on the case against Lewis. On Thursday, Judge Michael Aloise ruled that because any eye-witness testimony or discussion of video surveillance from around the park at the time of the murder would inevitably prolong the trial, he would not be allowing the defense to broach these subjects with witnesses.

According to Lewis' attorneys, the NYPD collected 16,000 hours of surveillance footage from around Spring Creek Park at the time of the murder, none of which show Chanel Lewis.

On Thursday, the defense attempted to call two witnesses, including a Verizon employee who was working on a telephone pole along the path that Lewis told investigators during his confession that he had used to enter the park (the defense claims the confession was coerced). The employee planned on testifying that he never saw Lewis enter or leave the park during the time the murder took place.

Aloise sided with the prosecution’s objections that the Verizon employee’s testimony had “no relevance whatsoever,” and would needlessly prolong the trial.

The second witness called by the defense was Jennifer Burke, an investigator with Legal Aid, who began testifying about cell phone towers near the park and the amount of surveillance cameras, before Assistant District Attorney Brad Leventhal interrupted, pointing out that Burke was reading off two pages of notes that had not previously been handed over to the prosecution, a violation of trial procedure.

Incredulously, Leventhal told the judge, “Your honor, I asked for these notes days ago!”

After a brief sidebar by the judge with the attorneys, Burke’s testimony wrapped up. The defense then rested, prompting "gasps" from those in the courtroom, who were surprised the defense's testimony lasted only minutes. 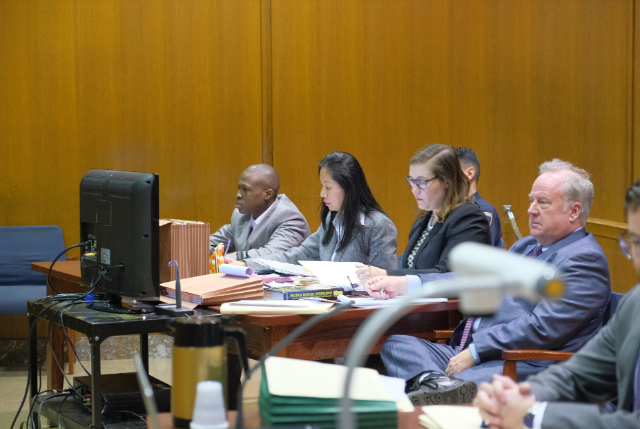 According to his defense attorneys, Lewis told them he had been running around a track in Linden Park in Brooklyn around 8 p.m. on the night of the murder, which could explain the cell tower pings that the prosecution put into evidence. It was there that Lewis claims he fell down and hurt his hand, an injury that prosecutors have pointed to as evidence that Lewis beat Vetrano before strangling her to death. No other evidence corroborating Lewis’s narrative of the evening has come to light, and the jury has not heard Lewis' version of events.

The prosecution’s final witness, Linda Razzano, the assistant director in the Office of the Chief Medical Examiner’s Department of Forensic Biology, testified about the DNA evidence against Lewis, which includes two “matches” found on Vetrano’s phone and neck. Lewis’s DNA was also possibly found on Vetrano’s fingernails, but the data fell short of proving a “match” — it only found that Lewis’s DNA could not be excluded from being present.

On cross-examination, defense lawyer Jenny Cheung drew out an important distinction about the DNA recovered from the scene by using a basketball metaphor to trace out how easily genetic material can travel from one place to another.

“Steph Curry passes to Kevin Durant, who shoots, makes a three-pointer,” Cheung asked Razzano. “[Durant] goes to get his water bottle. It's possible for Steph Curry to get DNA on that bottle?"

Razzano replied that it was indeed possible, and that “DNA can be transferred from place to place,” meaning that DNA found at a crime scene did not necessarily mean that person was present. Throughout the trial, defense attorneys have tried to tease out that both Lewis and Vetrano were patrons of Gino’s, a pizza place that Vetrano visited minutes before her final run. Lewis’s lawyers were satisfied with the cross-examination and chose not to call their own DNA expert to testify.

Defense lawyers familiar with the case told Gothamist that they were stunned that evidence as central to the case as surveillance footage and eye-witnesses were excluded from testimony, and believe that these issues will prove central to a possible appeal by Lewis if he’s found guilty.

In the courtroom directly next door to where Lewis’s trial has been taking place, a different case that hinges on a possibly coerced confession shares a striking similarity — they were both given to Detective Barry Brown of Queens Homicide South. The evidence against Lewis is far stronger than the evidence against Prakash Churaman, a juvenile defendant facing life in prison for a felony murder charge based solely on his confession and a single ear-witness.

On Thursday, prosecutors trimmed the thirteen-count indictment against Lewis to just four charges, including first-degree murder. If he’s found guilty, he faces life in prison.

#chanel lewis
#karina vetrano
#queens da
#original
Do you know the scoop? Comment below or Send us a Tip