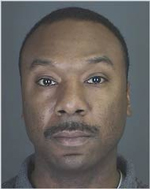 An NYPD officer was arrested early Thursday morning by Middletown, NY police after a young girl came forward and accused him of repeatedly raping her while she was a student at the karate school where he taught. Trent Young is a married 39-year-old who has been with the NYPD for nine years. Middletown Police said that prior to becoming a police officer, Young was a schoolteacher. He is accused of sexually abusing a female student beginning when she was 13 years old in December 2005. According to the victim, who is now 15, Young had her sign an oath of obedience as an ostensible part of a green belt ceremony before making her take off her clothes and sexually abusing her.

Young is accused of raping the girl 20 to 40 times during 2006 and 2007 at his home in Orange County, NY and at his karate school in West Milford, NJ called Iron Tiger Martial Arts. Middletown police located another girl, who attained the rank of green belt at the age of 14. Young asked her to sign an oath of obedience and take off her clothes, but she refused. Police are investigating to see if there were any other students who may have been victims of the police officer and karate instructor. He's being charged with second- and third-degree rape.

#An NYPD
#arts
#karate
#martial arts
#middletown
#nj
#nypd
#orange county
#rape
#The Police
Do you know the scoop? Comment below or Send us a Tip