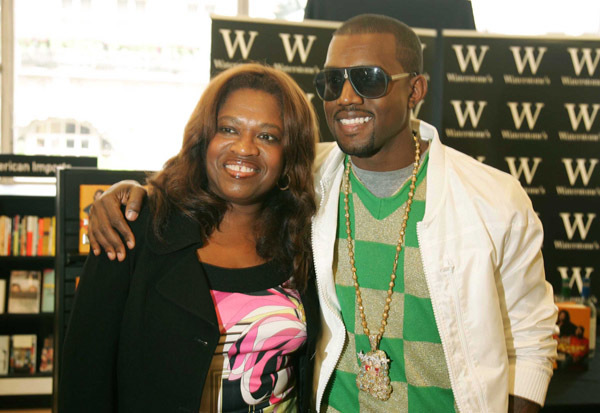 This weekend Kanye West's mother (and manager), Dr. Donda West, died after surgery - which the BBC is reporting was cosmetic (UPDATE: she was warned prior to getting the surgery). West was very close with his 58-year-old mother, often speaking publicly about their bond and even writing a song for her. Just this summer the two were at Borders to promote her new book, Raising Kanye.

Kanye was in London when told of the death, and traveled back to the States this weekend. His mother was a noted scholar, college professor and most recently the CEO of West Brands LLC and chairperson of the Kanye West Foundation. Last night at Hammerstein Ballroom Jay-Z dedicated his concert to her, and "near the end of his nearly two-hour set, the rapper asked for a moment of silence to pay respect to Donda West."

In 2004, author Olivia Goldsmith died after a routine face-lift -- Suzanne Vega wrote a song for her soon after called Edith Wharton's Figurines. After her death, another woman at Manhattan Eye, Ear and Throat for a face-lift also died. Makes one wonder how the new cosmetic walk-in clinics will fare -- and how Jocelyn Wildenstein is still alive.