Kai The Hitchhiker's Dad: He's Wandering Around "Because He Hasn't Given His Life To The Lord"

A week after their son was arrested for murdering a NJ man, the parents of Caleb McGillvary—better known as viral video star "Kai the Hitchhiker"—have spoken out for the first time. His mother said, "He has a family that misses him." His dad had another view, "He’s been wandering around lost because he hasn’t given his life to the Lord." 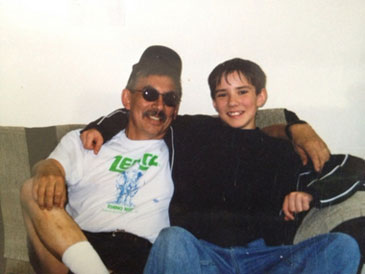 McGillvary has been charged with killing 73-year-old attorney Joseph Galfy in Galfy's Clark, NJ home on May 12. It's believed that Galfy and McGillvary met in Times Square the day before, and then had a sexual encounter in Galfy's home. Galfy's body was found a few days later by police, who then issued a public alert that McGillvary was wanted for the murder.

McGillvary became an online sensation earlier this year after video emerged of him explaining he stopped a man from attacking a couple by hitting him with a hatchet. He described himself as being "home free" and from West Virginia, but he's actually from Canada. His father Gil McGillvary told the Star-Ledger, "Caleb had a real tough life." He added, "He was in treatment homes until he turned 18 and then they cut him loose and washed their hands of him. Caleb made accusations that he was physically and mentally abused at one of the homes. The system let my son down."

McGillvary's mother, who would only be identified by her first name Shirley, disagreed with her ex-husband's claim that their son had ADHD and said he completed high school and took some college courses. The last time she spoke to him was last fall, and when she saw the viral video, she cried, "He has a family that misses him. He has a family that loves him. There have been some attempts, but we have no way of contacting him. He knows my number. My number hasn’t changed. If he calls and wants our help, we’re there for him."

Gil McGillvary, who is a probation officer, stated, "It’s innocent until proven guilty. Where’s the murder weapon? When did it happen? These are the questions that boggle my mind." He added, "I tried to put Caleb on the straight-and-narrow growing up, but this situation here, I can only tell him I still love him. He’s been wandering around lost because he hasn’t given his life to the Lord." (But he wandered around and saved a couple, too.)

Caleb/Kai is still in Philadelphia, and the NJ authorities are planning to extradite him.

#charges
#joseph galfy
#kai the hitchhiker
#lord
#murder
#viral video
Do you know the scoop? Comment below or Send us a Tip