Yesterday, NJ authorities had announced that they were looking for McGillvary, saying that he had cut his hair, was armed and dangerous and was last seen at a light rail station in Haddonfield, NJ. It seems that someone recognized McGillvary at a Starbucks in Philadelphia. By the time the police arrived, McGillvary had left; he was later found at the Greyhound Station and arrested at 6 p.m. Phily.com reports:

DRPA spokesman Tim Ireland said Thursday that Kai, whose real name Caleb Lawrence McGillvary, had spent Wednesday night with either close friends or family in Glassboro, and this morning asked his hosts for $250, a Greyhound bus ticket and a ride to the train station in Woodcrest.

After seeing McGillvary off at the station, his hosts called the Cherry Hill police, who contacted the Delaware River Port Authority Ireland said. DRPA police checked surveillance video from the Woodcrest station, saw a figure resembling the celebrated hitchhiker and contacted Philadelphia police with the info that McGillvary would likely be heading for the Greyhound station.

Earlier in the week, a surveillance camera captured images of the encounter between Kai and attorney Joseph Galfy, of Clark, N.J. The men later went back to the older man's house, officials said.

NJ police found the body of Joseph Galfy, an attorney and a member of the Clark Chamber of Commerce, on Monday in his home. Galfy was severely beaten (he died of blunt force trauma) and the Union County Prosecutor Theodore Romankow said Galfy was just wearing underwear and his socks.

According to the Star-Ledger, "They met, an unlikely pair, in Times Square last Saturday night... Their rendezvous, most of it later spent in and around Joseph Galfy Jr.’s ranch-style house on Starlite Drive in Clark, would last about 24 hours, until sometime Sunday evening when, authorities said, their encounter turned violent after a sexual tryst."

On Tuesday, McGillvary had written on his Facebook page, "what would you do if you woke up with a groggy head, metallic taste in your mouth, in a strangers house... walked to the mirror and seen come dripping from the side of your face from your mouth, and started wretching, realizing that someone had drugged, raped, and blown their fuckin load in you? what would you do?" but Romankow had called the status update "self-serving."

McGillvary, who shot to fame after a video of him describing thwarting an attacker with a hatchet went viral (he went on Jimmy Kimmel), will be transported to NJ in the next few days. Bail has been set for $3 million.

A Redditor noted that he saw Kai in Times Square last week—"I saw him two days before this in times square. Gave him a cigarette and he gave me a book recommendation. Didn't talk about murdering people, though"—and posted this picture: 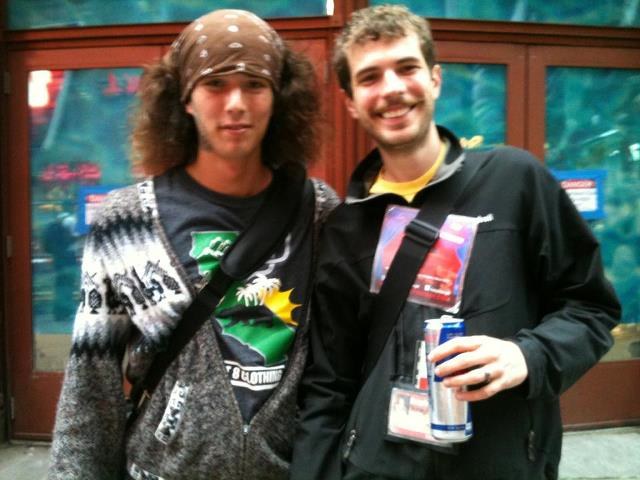 A Daily News reporter also described his near brush with McGillvary—apparently McGillvary asked to crash on his couch last week, but reporter Shane Dixon Kavanaugh's fiancee and roommate thought he was insane and said no.

#joseph galfy
#kai mcgillvary
#murder
#nj
#philadelphia
#Times Square
Do you know the scoop? Comment below or Send us a Tip