Justice For Junior: 7 More In Custody For Killing Of 15-Year-Old Boy Outside Bronx Bodega

Police officers in Paterson, NJ have arrested six men wanted for questioning in the murder of Lesandro "Junior" Guzman-Feliz, who was fatally slashed with machetes outside a bodega in the Bronx last week. They are currently in the process of being extradited back to New York City.

The men were arrested at a Paterson home on Sunday, which NorthJersey.com notes is "the same day New York City tabloids published stories about a gang leader’s social media apology to the family of Lesandro Guzman-Feliz, the 15-year-old killed when he was mistaken for a rape suspect." The "top leader" of the Trinitarios allegedly told Lesandro's relatives that he was kicking out all the members involved with the killing.

The murder was especially brutal, with surveillance videos showing a group of men dragging the 15-year-old from the bodega to the sidewalk at East 183rd Street and Bathgate Avenue, where they attacked him. The boy, bleeding from the gash in his neck, then died after walking towards St. Barnabas Hospital a few blocks away.

The NYPD arrested Kevin Alvarez, 19, in the Bronx and charged him with murder—he apparently was the one pulling Lesandro out of the bodega. 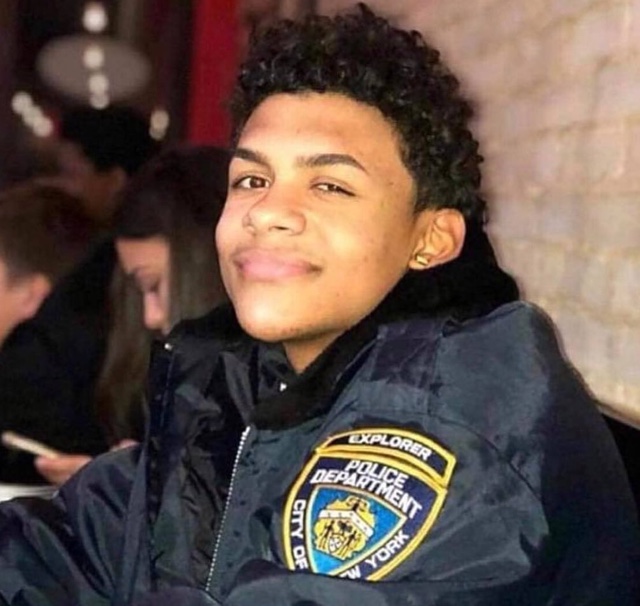 Murder victim Lesandra Guzman-Feliz, who had aspired to become a police detective (Via NYPD Chief of Detectives Dermot Shea)

The suspects arrested in NJ are Jose Muniz, 21, of Paterson, NJ; Joniki Martinez, 24, of Freeport, NY; and Jose Taverez, 21; Manuel Rivera, 18; Danel Fernandez, 21; and Santiago Rodriguez, 24, all of the Bronx, NY. The Post reports that Paterson police received a tip about the house where the suspects were hiding out in: "One officer looked in a second-floor window and saw a suspect matching the description of Bronxite Jose Taverez, 21, officials said. Cops were looking for a man with similar tattoos and red pants. Taverez wore khaki pants, but he had them hanging so low on his waist that the officer could see the red pants underneath, a department spokesman said."

Another suspect may be overseas: According to PIX11, "authorities are talking to someone in the Dominican Republic who may be connected to the deadly stabbing."

Investigators believe that Lesandro, who has been described as a happy teen who loved to play video games and wanted to become a police detective, was the victim of a mistaken identity revenge murder. Reports claim that he resembled someone in a video featuring the sister of a gang member having sex with another person.

Surveillance video also shows how a bleeding Lesandro tried to get help at the bodega after being stabbed, but the employees kicked him out:

LOOK HOW THEY KICK HOM AFTER HE CANE IN BLEEDING!!!! My fuckin heart Jesus lord be with his family right now

Three City Council members are urging that the grocery be shut down. The Daily News reports that members Ritchie Torres, Vanessa Gibson and Rafael Salamanca sent a letter to the Department of Consumer Affairs, stating, "An owner who stands by idly while a 15-year-old is dragged out of his store and murdered in cold blood with a machete is no longer worthy of doing business in NYC. While it might be unfair to expect a business owner, untrained in law enforcement, to perform heroics in the midst of savage gang violence, the failure to do something as basic as calling 911 is morally unconscionable."

The bodega has been closed since the killing. On Monday night, a huge vigil attracting hundreds was held outside, while thousands attended a wake for the boy. Among the mourners: NYPD Commissioner James O'Neill, basketball player Carmelo Anthony, and actress La La Anthony.