"Optics, people! Optics!" cried the faceless bureaucrat who Knows How This City Really Works. For a while there, everyone was supposed to think that Mayor Bill de Blasio was a "soft, hopelessly liberal leader," whose inability to control homeless people and topless women was "emblematic of a city backsliding." No more. Yesterday the mayor visited a homeless encampment in the Bronx to open up a can of Vigorous Messaging on your asses. A grass-fed Optics Sandwich dripping with Efficacy Chutney and a side of Damn This Dude Is In CONTROL!

Here's Mayor de Blasio staring straight into the Daily News' camera, delivering a message to all those unfortunate people out there who think they can just slink off into some dark corner and withdraw from the world that has repeatedly reinforced the notion that they do not belong in it.

We don't accept encampments of homeless people in this city. It's not fair to anyone. It's not fair to our neighbors; it's not fair to the homeless. We're gonna end this encampment. We're gonna give people better options: Safe havens, homeless shelters, drug treatment, mental health services. People should not be living out in the open on the streets of New York City. They should be someplace safe where they can get the care they need, and no neighborhood should have to deal with a problem like this, and it won't happen any longer.

Were those close-ups of syringes not enough for you? How about some superfluously purposeful pointing? 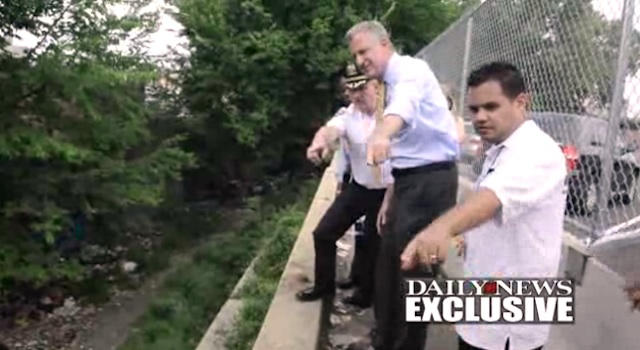 The mayor's visit to the encampment coincided with a massive sweep of more than 80 areas around the city where the homeless congregate, including a K2-saturated stretch of East Harlem profiled in the Times yesterday.

An NYPD spokesperson could not say whether any arrests were made during the sweep.

Mayor de Blasio could have talked about how he is increasing funding for homeless services by $1 billion over the next four years, or how the broken shelter site system is a shameful waste of taxpayer money that perpetuates the indignities heaped on our city's most vulnerable residents, or how Governor Cuomo isn't lifting a finger to provide the real solution to a systemic problem: permanent affordable housing.

But those Optics aren't as spicy.

Homeless advocates say that New York City needs around 30,000 units of supportive housing over the next decade to meet the demand. Even after admitting that the city has "a very serious homeless problem," Governor Cuomo has said 3,900 is a more reasonable number. The de Blasio administration wants 12,000 units.

"The State is going backwards in its support of New York City’s homeless—especially those that are mentally ill—and the latest example is its unacceptable proposal of 3,900 units of supportive housing over the next 7 years," Ishanee Parikh, a spokesperson for the Mayor's Office, told us. "We've consistently increased funding to make up for gaps left by State cuts, and we need the State to increase the number of units of supportive housing for mentally ill New Yorkers in need."

#affordable housing
#homelessness
#nuance can fuck right off
#optics!
#take that tabloid editorial boards and other people who live on the Upper West Side
Do you know the scoop? Comment below or Send us a Tip