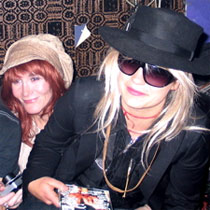 A note to anyone writing under a pseudonym: Don't let the pseudonym become larger than life. After deliberating for a couple hours, a jury came to a verdict in a film production company's lawsuit against Laura Albert, who wrote novels under the name JT Leroy. A tipster at the Federal Court just gave us the scoop:

Jury verdict in: Laura Albert and Underdogs Inc. are both liable for fraud and for breach of contract. Damages: $110,000 for economic damages, $6,500 for punitive.

For a few years, Albert had forwarded the illusion that JT Leroy was an actual person by having her ex-boyfriend's sister pose as "JT Leroy," the troubled son of a prostitute whose hard life gave inspiration to "his" books. Antidote Films had claimed that because the contract was with JT Leroy, not Albert, and since JT Leroy never existed, the contract should be found void (thanks, Frankenstein) and Albert should return the $45,000 in rights money. Albert, whose mother testified about her psychological problems, gave riveting testimony about her own difficult childhood, how she didn't want to write under her own name and how she channeled the "JT Leroy" persona to write.