[UPDATE BELOW] A Brooklyn jury has found NYPD Officer Peter Liang guilty on charges of manslaughter and official misconduct in the fatal shooting of 28-year-old Akai Gurley.

As the verdict was read, Liang slumped in his seat and placed his head in his hands; Gurley's family embraced and sobbed.

Liang shot Gurley while performing a vertical patrol of the Pink Houses in East New York in November of 2014. NYPD Commissioner Bill Bratton immediately declared the shooting an accident, and called Gurley a "total innocent."

Liang faces up to 15 years in prison for the second-degree manslaughter charge (any sentencing for the misconduct charge would be served concurrently). During its 19 hours of deliberation, the jury asked for three whiteboards, the NYPD's firearm and tactics guide, and blank sheets of paper. They also listened again to the 911 call made by a neighbor shortly after Gurley was shot, and had Judge Danny Chun repeat the charges twice.

Prosecutors for the Brooklyn DA's Office argued that Officer Liang and his partner had stalled for up to four minutes after shooting Gurley, arguing over who should call their superior, while Gurley lay dying.

In his closing statements, ADA Joe Alexis also suggested that Liang attempted to cover up the shooting.

“He went to the stairwell to find the shell casing, to keep this quiet. But when they found Akai Gurley on the fifth floor landing, they realized that they couldn’t anymore,” Alexis told the jury on Tuesday.

Liang's defense attorneys argued that Liang attempted to get help for Gurley much sooner, and painted a portrait of an overwhelmed rookie police officer who accidentally pulled the trigger.

“When officer Liang found Mr. Gurley on the landing, from that moment, Peter Liang never stopped trying to get help over the radio,” defense attorney Robert Brown told the jury in his closing statements.

Update 9:05 p.m.: Speaking outside the Brooklyn Supreme Court, minutes after the guilty verdict, Brooklyn District Attorney Ken Thompson reflected on the importance of the jury's decision. 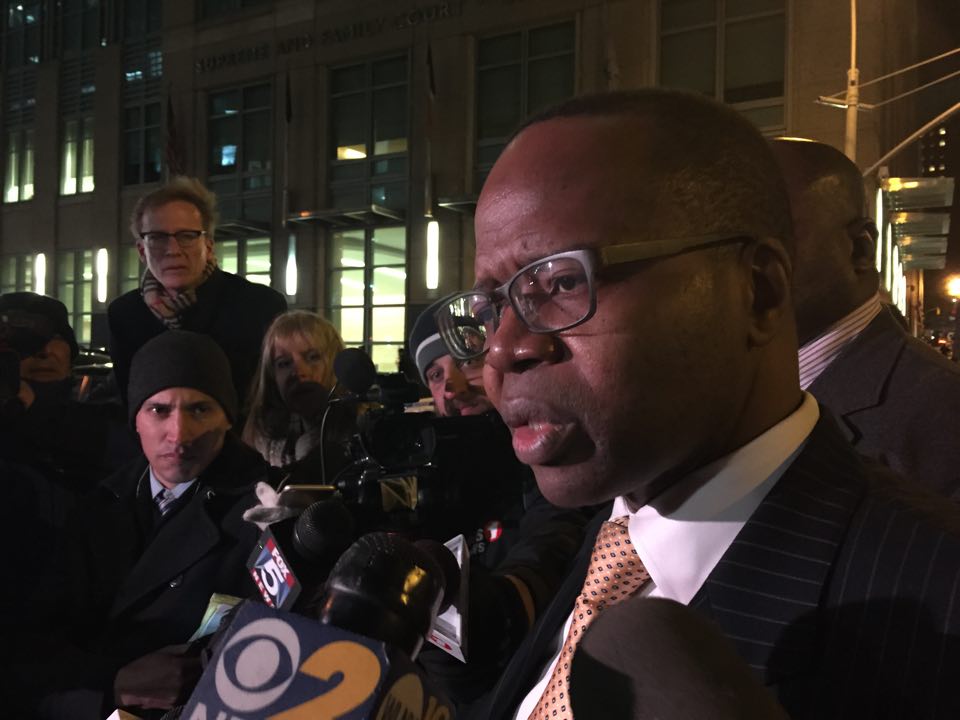 Ken Thompson speaks outside of the Brooklyn Supreme Court on Thursday evening. (Gothamist)

"This affirms that Akai Gurley's life mattered and that the lives of people who live in public housing matters," Thompson said, flanked by the Gurley family.

Asked what he said to Akai Gurley's mother, Sylvia Palmer, in the moments after the verdict, Thompson responded that he said, "I'm sorry."

Thompson, who entered office in 2014 pledging to fight for "one standard of justice," is the first District Attorney to successfully prosecute an NYPD officer in the shooting death of a civilian in recent history.

The Gurley family cheered as they exited the courthouse, raising their hands in unison.

"There are no winners here," Thompson said. "But justice was done."

Defense attorney Robert Brown told reporters outside the courthouse, "I can’t believe the jury came up with a reckless manslaughter verdict on this case. Anyone that sat in the courtroom would find it very hard to believe that [Liang] created a substantial risk of death."

Brown was especially upset over the prosecution's closing argument, where they abruptly changed tactics and said that Liang had intentionally fired his gun, and then tried to collect the evidence.

"It’s very clear that in the closing statement the prosecutor changed their theory," Brown told reporters. "Clearly that could give us a very good ground for appeal."

Brown said that the defense would make a motion to set aside the verdict, and if that fails, will pursue an appeal.

Karlin Chan, founder of the Chinese Action Network, a group that had supported Liang and helped raise money for his defense, smoked a cigarette outside of the courthouse.

"I think it's the wrong verdict. I was worried more about the criminal negligent homicide, not the manslaughter," Chan said. "This wasn't a conscious act."

Liang was not taken into custody, as the judge granted a request by the defense to continue his bail. His sentencing is set for April 14th.

Shortly after the verdict, the NYPD fired Officer Liang and his partner.