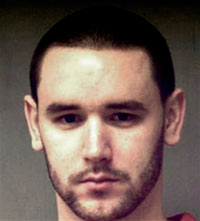 A Connecticut jury found Joshua Komisarjevsky guilty of 17 counts, including the murders of Jennifer Hawke-Petit and her daughters Hayley and Michaela Petit, nearly wrapping up the legal end of the horrific 2007 home invasion robbery-gone-wrong in Cheshire, Connecticut. Komisarjevsky now faces the death penalty in sentencing.

The harrowing details of Komisarjevsky and his accomplice Steven Hayes' plan have been aired over the trial; many of the details were heard during Hayes' trial last year (he was found guilty of 16 of 17 counts and acquitted of arson). The pair, both ex-cons who met at a halfway house, stalked Hawke-Petit and 11-year-old Michaela at a grocery store before breaking into the family's Cheshire home, taking the family hostage, beating Dr. William Petit and tying him up in the basement, and forcing Hawke-Petit to go to a bank and withdraw $30,000. Komisarjevsky sexually assaulted Michaela and insisted that Hayes rape Hawke-Petit to "square things up." Hawke-Petit was strangled and the daughters died from smoke inhalation after the men doused the home with gasoline—which Hayes bought at a local gas station. Petit was able to crawl out of the basement and ask for a neighbor for help. (Here are graphic pictures submitted as evidence.)

The Courant reports that Komisarjevsky "admitted tying Hayley and Michaela to their beds, sexually molesting Michaela and beating Petit in the head with a baseball bat, but he said he never intended for anyone to die." Dr. Petit told reporters after the verdict was announced that this trial was more difficult because "clearly there was a focus on Michaela" and noted the case has always been one of "sexual predation."

One of Komisarjevsky's defense attorneys, Walter Bansley, said they would try to save him from the death penalty, "We have confidence in the jury system, and we look forward to presenting mitigating evidence that we no doubt think the jury will view with reasonableness, compassion and mercy."