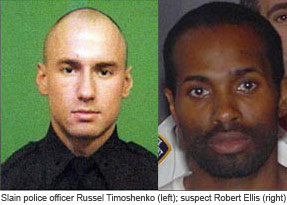 A jury acquitted a man of aggravated murder in the killing a police officer during a June 2007 traffic stop. The jury also found Robert Ellis not guilty of attempted murder (another cop was wounded) but he was found guilty on three counts of criminal possession of a weapon.

Police officers Russel Timoshenko and Herman Yan were fired upon when they stopped a BMW SUV with stolen plates in Brooklyn. Yan was wounded in the chest and arm while Timoshenko was shot twice in the head; Timoshenko, 23, later died of his injuries. Ellis was one of three suspects found after a police dragnet that reached into Pennsylvania. (Ellis claimed he fled because he was afraid he would die in gunfire, like Sean Bell.)

The three defendants—Ellis, Lee Woods, and Dexter Bostic— are being tried at the same time (but three different juries); prosecutors had said that Ellis was one of the shooters, but the jury apparently did not agree. From the NY Times:

In an interview, the jury foreman, who spoke on the condition that his name not be published, said that jurors had argued for hours — at one point, they stopped speaking to each other — and decided that ultimately, prosecutors had failed to provide evidence that linked Mr. Ellis to the murder and had called witnesses who had no credibility.

One of the main issues that the jury debated was who was driving the car at the time it was stopped — a key issue in determining who fired at the officers. Most of the jurors, after arguing for four hours over who was driving, came to the conclusion that it was Mr. Ellis, meaning that he did not fire one of the guns, the foreman said.

In explaining the verdict, the foreman said, “The prosecution put thugs, criminals and police officers on the stand — none of which were more believable than the next. He said that “we’d really like to make sure Mr. Ellis got what was coming to him. There was nothing that we could grab hold of that made us comfortable with murder or attempted murder.”

Later, he added, “We knew we were going to disappoint everybody.”

A juror told the Daily News, "a lot of us didn't understand the difference between the laws." And an alternate juror said, I tell you the son of a bitch was guilty. As guilty as you can ever be. He was in the car. He knew the guns were there. He killed a cop and he's walking. What justice is that?"

Police Commissioner Ray Kelly said, "I am stunned and disappointed by the verdict. My prayers are with the Timoshenko family as they contend with this ordeal." Patrolmen's Benevolent Association head Patrick Lynch was less restrained, "This mongrel today got off with murder. There are no words to describe the anger that New York City police officers have today. You can imagine what the family is going through today."

The News described Timoshenko's parents reaction: "The 23-year-old victim's mother, Tatyana, shook her head when the verdict was announced, and her eyes filled with tears. The slain cop's dad, Leonid, stood erect, his eyes burning with anger, and glared at the jurors."