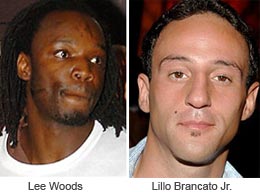 Yesterday, juries in two separate cop killing cases came back with news that left the victims' families upset: Lee Woods, on trial for killing police officer Russel Timoshenko during a traffic stop, was granted a mistrial because one juror was ill while Lillo Brancato Jr., on trial for killing off-duty police officer Daniel Enchautegui, was found not guilty of murder.

According to the NY Times, the jurors in Woods' case "had decided to convict Mr. Woods of weapons possession, but were still divided on the most serious charges: aggravated murder and attempted aggravated murder." One juror explained that while most wanted to convict him of murder, there were some holdouts, including the juror who reportedly had heart palpitations, were undecided.

Woods was being tried at the same time as the two other people in the car—Dexter Bostic, who was found guilty of murder, and Robert Ellis, who was acquitted. One issue may have been the fact that there was one driver and two shooters in the situation, and the jury seemed to believe he was the driver. Another juror said, "I don’t have a sense of whether he was guilty or not." But Timoshenko's mother was upset, saying, "There's no justice in this count. It's so obvious, I don't know how much more evidence you need."

In Brancato's case, jurors felt the police work was shoddy. One juror told the Post, "A lot of the police investigation was simply sloppy. It was sloppy police work." He and another juror "could not believe that two teams of four detectives did not take notes when they interviewed Brancato in the hospital." Brancato was found guilty of attempted burglary.

Enchautegui's sister Yolando Rosa expressed her dismay, "I'm disappointed, I'm disappointed. What message is this sending out to the New York City police officers today?" Brancato faces a sentence of 3 1/2 to 15 years for the burglary conviction. Since he has been in jail for the past three years, his lawyer is asking for time served, but the prosecutor says "she will ask for the max."