Junior Gotti's Fear of the Whack 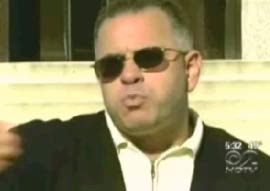 John Gotti Jr. interrupted his lawyer and spoke with reporters after appearing at Federal Court in White Plains yesterday. Gotti, reacting to a 2006 story in the NY Post which claimed he was becoming a government informant, became angry and said that his family was scared of a possible mob hit:

Gotti wants the FBI agent who spread the rumor charged. Of course, no one really wants to get Junior mad - when he was caught on tape ranting and raving about wanting to kill his uncles, he said, “I made a pact with myself one night in my bed, on my father’s and brother’s grave. I will beat them down like a two-dollar French hooker."

Gotti was in court to face the government's claim that he didn't pay over $200,000 in taxes and therefore violated the terms of his release from prison. Prosecutors were trying to get access to his financial records from Gotti's probation officers, but a judge said that they needed to show more reason why they needed them.

As for another Post story (the cover story from Monday) suggesting that Gotti would be charged with five murders, his lawyer said, "We don't expect that there will be any charges," and referred to the fact that Gotti has been tried three times unsuccessfully for the alleged attempt to kidnap Curtis Sliwa of the Guardian Angels.