Junior Gotti to be Charged Once Again 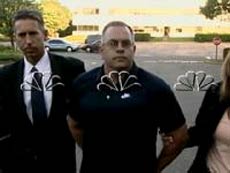 John Gotti Jr. is like the FBI's Great White Whale! After his three recent trials ended in mistrial--prompting a prosecutor to say that going after Junior "was above his pay grade"--the feds are at it again, arrested the former Junior don of the Gambino crime family at his Oyster Bay home this morning.

\WNBC say that he will be charged with murder conspiracy charges in Manhattan federal court, stemming from "an investigation by Tampa federal prosecutors into a former Gambino drug ring that operated in New York, New Jersey and Florida." Five other men will be charged with racketeering, alleging "some of them were involved with Gotti in one of the three New York murders." Last fall, the Post suggested Gotti could be charged with five murders, including a 1983 murder where he "allegedly disemboweled" a Queens man with a boxcutter.

Gotti Jr. has served years of prison time for other racketeering charges (bribery, extortion, etc.) back in 1999. Lately, he has been claiming he's poor and that he's scared of being whacked.

#gambino
#Gotti Jr.
#john gotti jr
#Junior Gotti
#mafia
#mob
#murder conspiracy
Do you know the scoop? Comment below or Send us a Tip
A new Gothamist is coming! We’ve moved comments over to our beta site. Click here to join the conversation and get a preview of our new website.