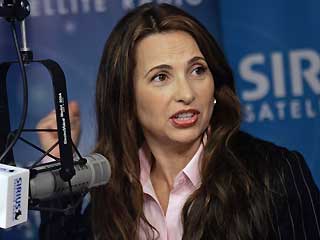 She states they asked her to lie to federal investigators about her one-time lover and former police commish, Bernard Kerik (who at the time was working with Regan on his autobiography The Lost Son, and is currently indicted by a grand jury for conspiracy, mail fraud, wire fraud and lying to the IRS).

Regan, 54, says in court papers that News Corp.'s political agenda centers on Giuliani's presidential ambitions......Regan says "it is now widely accepted'' that one of Giuliani's vulnerabilities is the 52-year-old Kerik. Because of Regan's affair with Kerik, court papers say, a senior News Corp. executive told her he believed she had information about Kerik that could hurt Giuliani's campaign and she should lie to federal investigators. Court papers say another executive told Regan, a HarperCollins editor for 12 years, to withhold documents that were clearly relevant to the government's investigation of Kerik.

The claims are being called "preposterous" by News Corp, who claim Regan was rightfully fired with more than two years left on her contract because of anti-Semitic remarks she made, something Regan says was made up to undermine her credibility and to add to the media frenzy of her firing (over that OJ Simpson book she commissioned). The NY Times delved into her dismissal last year.

In an upcoming Harper's Bazaar article (out November 20th) Regan will tell her side of the story, and the Daily News reports that in her suit "she casts herself as one of the brightest stars in publishing, touting her ties to the likes of shock jock Howard Stern, conservative commentator Rush Limbaugh, ex-porn star Jenna Jameson and pro wrestler Mick Foley." Too bad SNL writers are still on strike - toss those four in hot tub with our girl Judy and the skit's ready for air.