A federal appeals court has upheld the "core provisions" of New York's SAFE Act and a Connecticut gun control law, both passed following the 2012 Sandy Hook Elementary School shooting in Newtown, Connecticut and challenged in court by gun-rights activists on constitutional grounds.

A three-judge panel from the Second Circuit Court of Appeals ruled on Monday that the specific guns and parts banned by the laws are directly linked to mass shootings, and should be restricted.

"When used, these weapons tend to result in more numerous wounds, more serious wounds, and more victims," according to the ruling, written by Judge Jose Cabranes. "These weapons are disproportionately used in crime, and particularly in criminal mass shootings."

New York's law bars ownership of certain military-style guns, and originally made it illegal to load more than 7 bullets into a 10-round magazine, but allows those who already own a now-banned gun to keep it as long as they register it with state police (not many have). The judges ruled that the laws stand, but that the New York seven-round limit and Connecticut's ban on a specific Remington rifle should be struck down as unconstitutional. The judges singled out the seven-bullet limit, already struck down by a lower court, because New York failed to prove that it would inhibit criminals from stopping short of fully loading a magazine, but left alone bans of magazines that contain more than 10 bullets.

"Like assault weapons, large-capacity magazines result in 'more shots fired, persons wounded, and wounds per victim than do other gun attacks,'" the judges wrote.

The gun lovers who sued argued that the banned semi-automatic weapons are already commonly used, by and large for lawful purposes, but the states maintained that it's rare for someone to defend herself or go hunting with an AR-15. 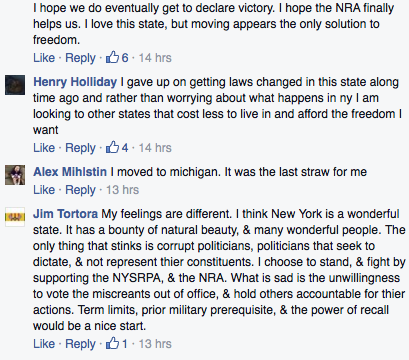 One plaintiff is the New York State Rifle and Pistol Association. On Facebook, when not cheerleading a Donald Trump presidency, misquoting George Washington, and proclaiming that the Holocaust and the U.S. internment of Japanese Americans during World War II could have been prevented by more gun ownership, the group keeps its constituents up to speed on the litigation.

Association president Tom King called the ruling a "mixed bag" but hopes to appeal it all the way.

"Absolutely we are going to take it to the Supreme Court," he told reporters. "That was our plan. That is what we said from day one."

On Facebook, the group struck a more celebratory tone, telling its fans the ruling was "a great victory," and writing "this offers us the opportunity to take the final steps on our way to the U.S. Supreme Court and full repeal of the so called 'assault rifle' ban." In response, current and former upstate and Long Island residents debated what to do next. Some argued for moving out of New York as what one man called "the solution to freedom." Others contemplated ways to, as one Austen Pelkey wrote, "do something about being held hostage by" New York City's voting power. "NYC is a problem," Pelkey said.