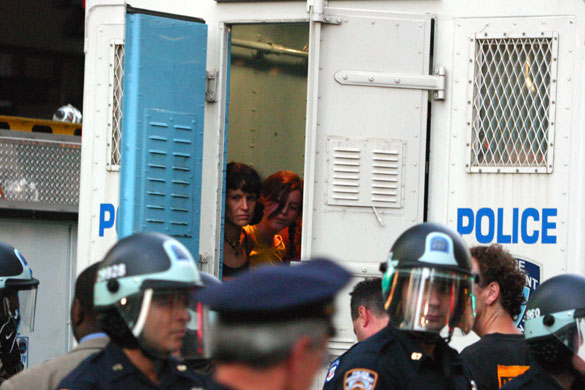 Almost three years after the 2004 Republican National Convention, the tactics the NYPD used are still being debated in court. Per the NY Times, federal judge James C. Francis ruled yesterday that "hundreds of field intelligence reports by undercover investigators who infiltrated and compiled dossiers on protest groups" must be disclosed.

The city had been battling the NYCLU over the release of the intelligence reports ever since the revelation this past spring that the NYPD started checking in with protesters back in 2003. Some sensitive information will be redacted and protected, but Judge Francis ruled that general information could be released, "It is difficult to imagine how someone could determine the identity of an undercover officer simply from the fact that he or she was present at a meeting or protest attended by dozens, if not hundreds, of people."

The Times reports that if the city decides not to appeal the decision, it has 10 days to turn over the reports. The NYCLU's Chris Dunn said, "We believe these documents will reveal not only the vast scope of the NYPD's political surveillance operation but also that there was no need for the NYPD's harsh treatment of protesters."

You can read the decision here (PDF).

#convention
#court
#News: NYC
#ny times
#nypd
#people
#protest
#republican
#republican national convention
#the city
#The NYCLU
#the times
Do you know the scoop? Comment below or Send us a Tip