It's been almost a year since cyclist Mathieu Lefevre was killed by the driver of a flatbed truck one late night in a desolate section of Williamsburg. No charges were filed against the driver who left him to die (at least not yet—more on that below) and Lefevre's family, who reside in his home country of Canada, have been consistently outraged by the NYPD's handling of the investigation. After the department repeatedly rebuffed their efforts to obtain basic information about the investigation, they took the NYPD to court to demand all relevant documents. Today a judge issued a final ruling on the matter.

The NYPD begrudgingly gave the Lefevre family almost all of the material pertaining to the investigation, but only after the Lefevre sued them under New York's Freedom of Information Law. Today's ruling (below) from New York Supreme Court Justice Moulton denies the Lefevre's motion to get the NYPD to pay the legal fees, on the grounds that the NYPD did ultimately comply. But Moulton's ruling pointedly criticizes the NYPD for having "needlessly delayed handing over the documents and other materials" and finds that there was "no justification" for the delays, which "were longer than necessary, and were no doubt more than agonizing to" the Lefevres. 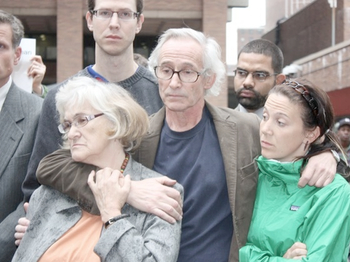 Lefevre's family at a rally outside NYPD Headquarters (Kristina Monllos/Gothamist)

"I think this is vindication for the Lefevre family," their attorney, Steve Vaccaro, tells us. "They believed these delays were unjustified and the court so found. These were agonizing delays for a couple that lost their son, and the NYPD should produce these documents more expeditiously." Vaccaro points out that "the Lefevre family only got the documents by litigating this case full measure. And the NYPD knew that if they held back, the court would have found in our favor. It's some solace that the judge recognizes that."

Of course, Vaccaro also finds it "unfortunate that Judge Moulton interpreted prevailing law in a manner that allows the NYPD to escape financial liability for its delays, simply by completing its production in the final stages of the lawsuit. We are hopeful that NYPD will take Judge Moulton's criticism to heart and end its policy of needlessly stonewalling crash victims' families who seek to learn the truth about the death of their loved one."

The Lefevre estate has also initiated a civil lawsuit against the driver, Leo Degianni, the company he works for, and the company that made his truck, DaimlerChrysler. Vaccaro tells us that the NYPD exonerated the driver from hit and run liability on the grounds that the truck had poor sight-lines. "Investigators believe it was plausible [Degianni] didn't know he ran over a cyclist and dragged him 200 feet," Vaccaro says. "We disagree with that, but if that is something that's persuasive to a jury, we want to make sure the company that made those sightlines is held liable."

And it seems that Degianni could still face criminal prosecution. Although the NYPD has closed their file, the Brooklyn DA's office is still investigating. We're told that several weeks ago the DA's office hired an expert to examine the truck and study the sight-lines to see if the driver's excuse is plausible. "The wheels of justice are turning," Vaccaro adds. "But slowly."

#cyclists
#FOIL
#mathieu lefevre
#nypd
#williamsburg
#original
Do you know the scoop? Comment below or Send us a Tip