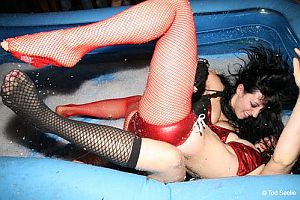 A judge has dismissed a lawsuit brought by a former NYU student against the university after he broke his hip in a Jell-O wrestling tussle gone horribly wrong. As a junior in 2004, Avram Wisnia was one of the organizers of what was supposed to be a totally awesome “Beach Bash” event, held in an NYU dormitory courtyard with water guns, water balloons, and a kiddie pool filled with the gelatinous snack. Wisnia sought a million dollars in damages for his injury, claiming the university was at fault for sanctioning the bash, providing the Jell-O and failing to “maintain a safe condition.”

In siding with NYU, the judge took Wisnia to task for continuing to roughhouse in the kiddie pool after he was initially thrown in by his buddies, and pointing out that Wisnia “was aware of the potential for injury when he decided to grapple with another student in front of a kiddie pool on a concrete surface.”

Immediately following the decision, John Beckman, a spokesman for NYU, seized his big moment to crack wise to the Daily News with this finely crafted statement: “This case broke the mold. But all in all, we believe justice was served sweetly.” (Those who just sprayed coffee all over their computers should seek damages from NYU.)

Photo of a totally unrelated and much happier Jell-O wrestling event by Tod Seelie.