A state Supreme Court judge has ruled that Two Bridges project cannot go forward without undergoing a full public review process, a step which the developers and the city had argued was unnecessary because the mega development represented a "minor modification" to the original site plan.

The decision, which was issued late Thursday, was in response to a lawsuit filed by the City Council and Manhattan Borough President Gale Brewer and marked a significant and stunning defeat for a high-profile development that would have dramatically raised the skyline along the Lower East Side and Chinatown waterfront.

In their complaint, the City Council and Brewer had argued that the four high rise towers, which included a 1,008-foot supertall, were completely out of scale with the surrounding neighborhood of low-rise buildings. In an eyebrow-raising move, the city Planning Commission last year voted to approve the project forward without sending the plans through the city’s uniform land use review procedure, a lengthy public review process that requires City Council approval.

“The Council has for years said this project—which would totally transform the Two Bridges neighborhood—requires public review and ultimately City Council approval,” said City Council Speaker Corey Johnson, in a statement. “We’re very grateful that the State Supreme Court agreed and that the community, the Borough President, and the City Council will have an opportunity to provide real input and help shape the future of this neighborhood.”

The news did not come as a complete surprise. In June, after hearing a days worth of testimony, Judge Arthur Engoron had tipped his hand, saying that he simply could not accept that a project so large could be built without a more extensive public review.

“You can’t just do this because the zoning allows it,” Engoran told the court. “I just can’t believe this is the case.” 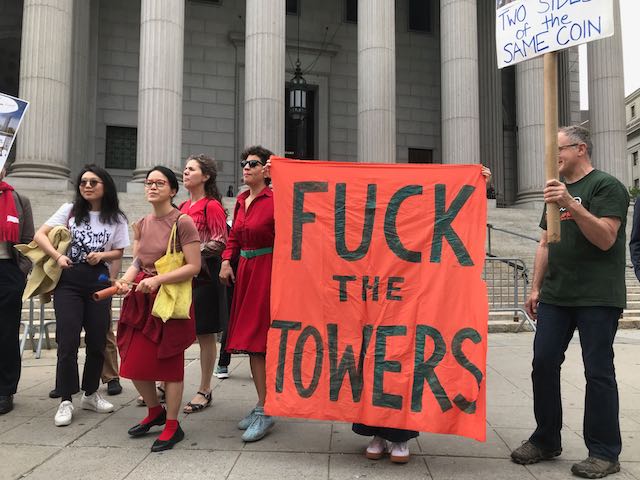 A protest against the Two Bridges development in June. (Elizabeth Kim / Gothamist)

The ruling also represents a setback for the de Blasio administration, which had argued that the mega development would create much-needed affordable housing. The estimated $4.5 billion development would have contained 2,700 new residential units, of which 25 percent, or 690 units, would be below-market rate, and 11,000 square feet for retail.

A spokesperson for the city’s Law Department issued the following statement, “We are disappointed by the court’s ruling impacting a project expected to add hundreds of affordable housing units and improve transit infrastructure for the community. We are considering the city’s legal options.”

A spokesperson for the group said in a statement:

“Needless to say, we disagree with the court's ruling, as these projects were lawfully approved and met all legal requirements. They were proposed after years of community consultation, public review and environmental analysis, and in compliance with zoning that’s been in place for more than 30 years. We will appeal this decision in the near future and look forward to delivering nearly 700 units of permanently affordable housing, $40 million in upgrades to the East Broadway subway station that will make it ADA-accessible for the first time, $12.5 million in essential repairs to the local NYCHA complex and $15 million in upgrades to three public parks in the neighborhood."

All told, there were three lawsuits filed against the developers and city that sought to stop the project. Two others, filed by various community groups, argued that the project was completely in violation of city zoning regulations and should not be approved at all.

While Judge Engoron has already heard testimony for the other two cases, he has yet to rule on them.

Nonetheless, the decision on the City Council case was critical to all involved. For opponents of large high-rise developments, it also sent a message about the role of the judicial branch, which has often favored developers and the city in land use cases.

“It’s great to know that the court takes its oversight authority seriously,” said Paula Segal, an attorney who argued one of the lawsuits for a collection of five community groups that included Good Old Lower East Side. “Usually there’s so much deference to the city.”

#Chinatown
#City planning commission
#lawsuit
#Lower East Side
#mega development
#real estate
#Two Bridges
Do you know the scoop? Comment below or Send us a Tip